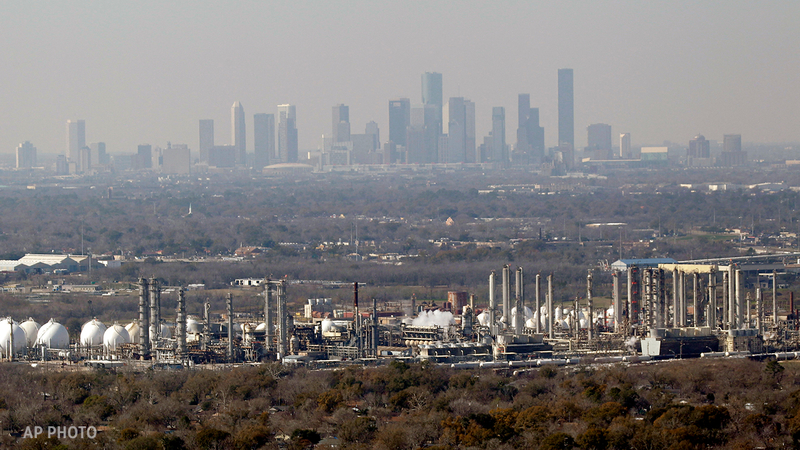 BAYTOWN, Texas (KTRK) -- This week, the oil and gas industry is center stage with federal and state leaders, leaving neighbors in communities that depend on the energy sector anxious.

The state's latest jobs report shows 14,000 mining and logging positions, which includes oil and gas, were lost in the Houston area during 2020. One of the hardest hit areas continues to be Baytown, which relies on the oil and gas industry.

Baytown's unemployment rate exceeds 16%, which is more than double the Houston area. There's a fear it could get worse after President Joe Biden signed an executive order Wednesday regarding climate change.

The order looks to freeze oil and gas leases on public lands. The Texas Oil and Gas Association said if this becomes permanent, 120,000 jobs will be lost in Texas by next year.

This is a statistic not sitting well in Baytown, a community already struggling with a declining oil and gas industry.

WATCH: The future of oil and gas jobs in Houston, according to experts
EMBED More News Videos

In the midst of oil industry job losses, an expert gave these reasons for why Houston is in position for the next generation of energy jobs.

"My dad works in the oil industry," Bethanie Lege said. "It's definitely going to be a lot more difficult."

"I think that we need to keep drilling and we did need to have more supplies, and keep the people working," Gordon Linder said.

"I am totally against Biden doing anything like that," Rodney Buentello said. "I think we need that as a society. We need that as our economical standpoint."

On Thursday, Gov. Greg Abbott took aim at the president's executive order with one of his own.

"Texas is going to protect the oil and gas industry from any type of hostile attack launched from Washington D.C.," Abbott said during a roundtable discussion in Midland.

Here's what Abbott wants to do: his plan is to sue the federal government.

He's ordered state agencies to look for tools to challenge the Biden administration if they target oil and gas. Abbott is also going after local leaders looking to impose rules aimed at gas products.

"I am supporting legislation that prohibits cities and counties from banning natural gas appliances," Abbott explained.

Texas Gov. Greg Abbott invoked his time as state attorney general in his renewed battle against what he called government overreach. In the video, see the action he took against the Biden administration.

Energy experts believe the oil and gas industry will continue to be impacted in the future, but not necessarily because of Biden's executive order.

"The oil prices are still extremely low, and the second is the flight of capital from oil and gas, and this happened long before the pandemic," explained Ramanan Krishnamoorti, University of Houston chief energy officer.

Krishnamoorti said while there's concern about the future of oil and gas, he has said the energy capital of the world is in a perfect position for what comes next.

"If there is a place that can do it, it's Houston," Krishnamoorti said. "Houston knows how to do these things. We have the right workforce. We have great people who know how to make engineering systems work."

Krishnamoorti said if the federal government spends $2 trillion on new energy sources, it could spark innovation and high-paying jobs in the area.

He said Houston could lead the globe by developing zero-emission fuel, and ways to use hydrogen.

"Really make it something that the future generations would say, 'Wow, these guys took a challenge and adversity and made margaritas when you have lemons," Krishnamoorti explained.