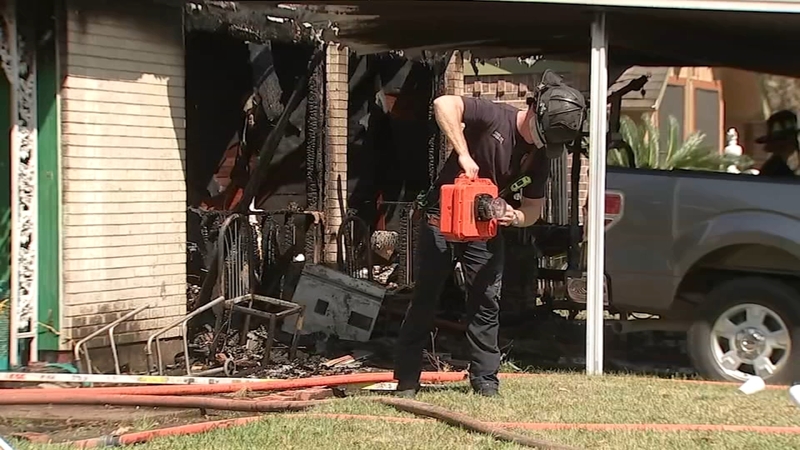 Strangers save couple from their home in flames

HOUSTON, Texas (KTRK) -- A woman died in a house fire on Sunday morning in northeast Houston.

At about 10:40 a.m., a couple couldn't escape the flames because of the burglar bars on their home near Lemond Drive and Micollet Street.

Houston Fire Deputy Chief Douglas Harrison said they transported the couple to the hospital. The husband is being treated for smoke inhalation, and the wife died at the hospital.

"Heard the dude hollering and went down to help him," said one good Samaritan, who does not want to be named. "I saw him standing at the burglar bar. My barber pulled his truck down, put the chain on the burglar bar, and snatched him out. I tried to go in and get the wife. But the smoke and flames were too hot."

Witnesses say they watched helplessly until the Houston Fire Department arrived and removed the woman from the house.

"At first, I was down. I was crying. I was doing everything. I was like, 'Man! On my birthday. Why on my birthday?' But I'm alright now," said the second good Samaritan, who does not want to be named.

The man is expected to be OK, thanks to strangers who used their truck to help rescue him.

"They had to do CPR at the time. I believe they got pulses back, is what I'm told. But she is in critical condition," said Harrison.
The arson team is investigating since the couple could not tell them what started the fire.

"They (the two good Samaritans) definitely stepped up and helped the problem. They didn't just sit back and watch," said Harrison.

"God just puts you in the right place at the right time. To be in people's life," said the first good Samaritan.