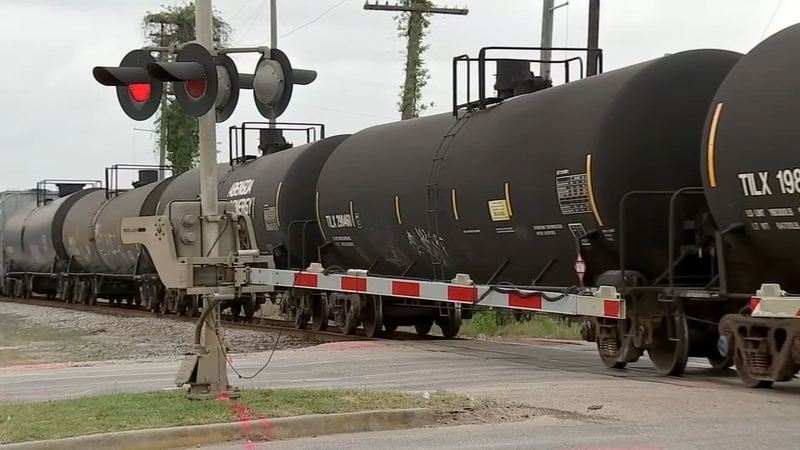 HOUSTON, Texas (KTRK) -- Multiple times a day, at the intersection of Lockwood and Clinton, trains rumble through the Union Pacific rail line. If all goes well, a crossing may take 15 to 20 minutes. But more often than not, trains will sit idle, blocking the major intersection at the industrial hub of the East End for hours.

Workers at the Cadeco coffee company next to the tracks have developed elaborate workarounds, including checking live security camera footage on their phones while out running deliveries.

"We have just figured out ways, where we're trying to be proactive. We send maps out with detours that the drivers can take, so that way we can try to avoid it," said Amber Sheppard with the company. "We have a lot of issues where we have employees that get stuck by the train, or they have to reroute, they're late, and are impacted that way."

The story is similar just down the street at Texas Iron and Metal, a company started by Ariel Reichenthal's great-grandfather. They have been located in the East End since the 1950s, but the train problems have gotten worse in recent years.

"It's losing us customers," she said, admitting the family-owned business has discussed relocating out of the neighborhood. "As much as we want to stay here, we care about our customers and their abilities to access what they need. We supply materials to the city of Houston in emergencies and if they can't get to us, that's affecting the city as well."

The problem is so dire that on Thursday evening, the East End Chamber organized a community meeting bringing together representatives from Union Pacific, Congresswoman Sheila Jackson Lee, and lots of upset residents as well as business owners.

"A lot of business owners, they love being on the East End but they want to move because they're having trouble getting their cargo from point A to point B," said Chamber President Frances Castañeda Dyess. "So we want to be good community partners with Union Pacific and other railroads and just find a way to work together to eliminate a lot of the stoppage time, and business owners can find a way to get their items to the freeway and to their customers."

Union Pacific says they have already invested more than $1billion to their Houston region infrastructure and are still working on investments to help ease congestion.

"This is a huge hub as well as the heartbeat of our operations," said Richard Zientek, Senior Director of Public Affairs for Union Pacific. "There's always going to be trains in Houston, but our goal here tonight was to come listen to the communities concerns, address those questions that we can and continue to have an on-going dialogue."

During the meeting, at least five representatives were on hand, listening to complaints.

The company also released a new website for neighbors to report train blocking in real-time. https://c02.my.uprr.com/ui/rmc_ext/#/report-incident/1
Submitting the report won't mean the train is moved faster, but it will add to the collection of data Union Pacific looks at to make future changes.