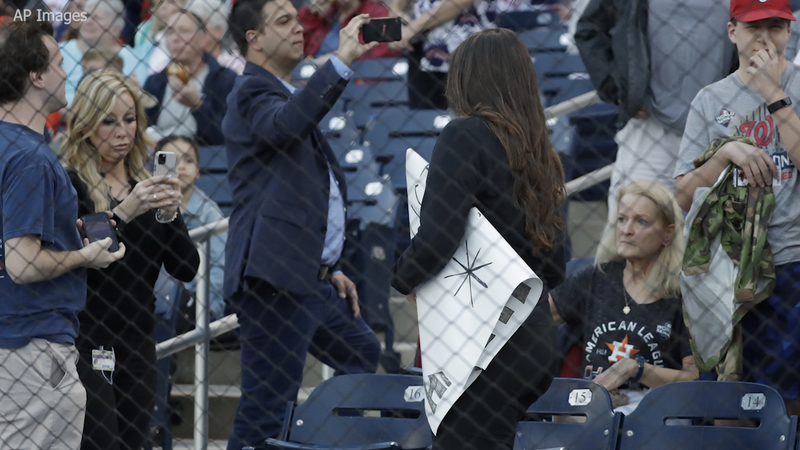 WEST PALM BEACH, Florida -- Fans hoping to heckle the sign-stealing Houston Astros at the team's spring opener were met with quite the coincidence.

They got their signs taken.

In the Astros' first spring training game since their sign-stealing scandal rocked baseball, some fans brought signs jeering Houston, and ballpark personnel confiscated them before the Grapefruit League opener against the World Series champion Washington Nationals on Saturday night.

In a Series rematch, the Nats got hearty cheers, while everyone in an Astros jersey, including the mascot, Orbit, were booed. Houston did not use any players implicated in Major League Baseball's investigation.

Two men in Nationals gear sitting behind the Astros' dugout briefly held up crudely drawn signs just before first pitch. One read: "You see my hate?" in large block letters. Another said: "Houston *'s" to read "Houston asterisks," suggesting the Astros' 2017 World Series title should be permanently blemished because of the cheating.

The men didn't get to show off their signs for long. A woman who worked for the ballpark quickly approached to take the signs. The men didn't argue with the woman, but they did look confused as she walked away with the signs folded in her arms.

The Astros and Nationals share a spring training complex. Houston was designated the home team Saturday.

Matthew Silliman, who held one of the signs, said he didn't know they were forbidden. He drove to the game inWest Palm Beach, Florida, from Tampa Bay and said he had been waiting to let the Astros know what he thinks of them.

MLB commissioner Rob Manfred concluded last month that the Astros violated rules by using a television camera to steal catchers' signs during Houston's run to the 2017 World Series title and again in the 2018 season. Manager AJ Hinch and general manager Jeff Luhnow were suspended for one season and then fired by the team, but players were not disciplined.

Fans booed loudly every time the public address announcer said "Astros," and fans behind Houston's dugout heckled Jose Altuve, Carlos Correa and Lance McCullers Jr. as they stood on the dugout steps before the game. A few fans banged on their metal seats, attempting to mimic the banging on a trash can the Astros used to relay stolen signs to hitters.

One fan in a Nationals jersey yelled: "Hey Altuve, are you scared to play tonight?" Others screamed "You suck!" and "Cheaters!"

First-year Houston manager Dusty Baker said he didn't think the reception was "too bad" and said his team will have to get used to it.

"You'll probably get the same reception most places you go, especially the first go-round," he said. "So you've just got to put your big-boy pants on and then just try to shut it out and just play baseball and realize this too shall pass."

Washington ace Max Scherzer, who started Game 7 to help the Nationals to their first title, also started Saturday and pitched two scoreless innings. He was asked if he thought Saturday night's game would be more dramatic considering what's going on with the Astros.

"Maybe, I don't know," he said. "We won the World Series, so it wasn't like I have a vendetta to hold. So for me over here, we're just trying to move forward and get ready for our season."

Scherzer was a bit disappointed that none of Houston's starters played Saturday, when he allowed one hit and struck out two.

"You want to face the best," Scherzer said. "They're a great lineup, but I get it, it's early in the spring, you're not going to see them."

While Silliman didn't get to keep his signs, he said it wouldn't stop him from heckling the Astros with his voice.

He didn't have long. The game was delayed because of rain after two innings and canceled about 90 minutes later when rain continued.