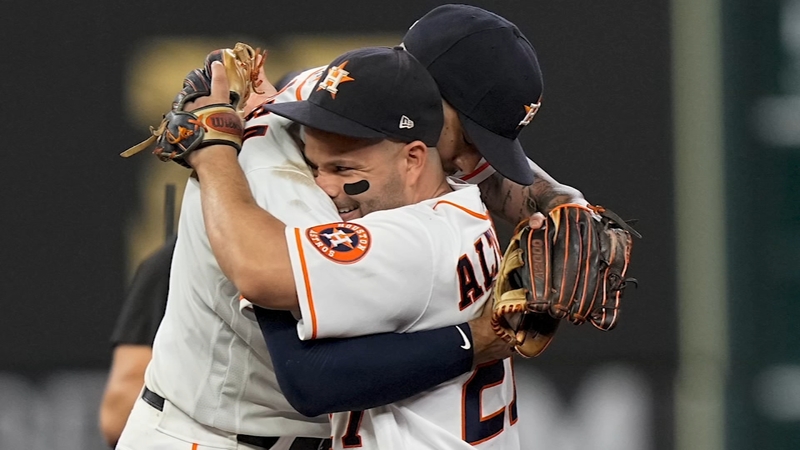 Boston became the first team to slug two grand slams in a postseason game, with Martinez and Devers connecting in the first two innings of a 9-5 win over the Astros on Saturday that tied their AL Championship Series at one game apiece.

Martinez made it 4-0 with his opposite-field shot off rookie Luis García with two outs in the first. It was the first career playoff slam for the four-time All-Star, who began his career with the Astros.

García exited with right knee discomfort after walking the first batter of the second inning. Jake Odorizzi took over, and shortly after a 13-minute delay while the right-hander warmed up on the field, Devers connected with one out for slam No. 2.

Game 3 is Monday night in Boston. It's the first of three consecutive home games for the Red Sox, back in the playoffs for the first time since winning the 2018 World Series after downing Houston in the ALCS.

Kiké Hernández, who Boston manager Alex Cora referred to Friday night as "en fuego" after a two-homer performance in Game 1, remained on fire Saturday. He had two hits, highlighted by a solo homer in the fourth inning.

Hernández has been this postseason's hottest hitter, leading all players with 16 hits, five homers and four doubles. His nine extra-base hits are also the most in these playoffs and tied a Red Sox postseason record with Mike Lowell (2007), Kevin Youkilis (2007) and David Ortiz (2004 & 2007).

The Astros captured a 5-4 win in the series opener as they rallied behind homers from Jose Altuve and Carlos Correa before falling into the huge hole early in this one.

The Red Sox were up 9-0 when Houston got on the board with an RBI double by Kyle Tucker with two outs in the fourth. The Astros cut the lead to 9-3 when Yuli Gurriel followed with single to right field that scored two more.

Gurriel and Jason Castro added solo homers in the ninth off Darwinzon Hernandez before Ryan Brasier got the final out.

The injury to García is another blow to a Houston team trying to reach the World Series for the second time in three years. The Astros are already reeling after an injury to staff ace Lance McCullers Jr. that kept him off the roster for this series.

They won the championship in 2017, a crown tainted by the team's sign-stealing scandal.

When McCullers went out, manager Dusty Baker said the team would just have to "hit more" to absorb the loss. But now that the rotation is further depleted, it'll be an even taller task for this powerful lineup outgunning a Boston team whose offense has outpaced everyone this postseason.

Odorizzi was left off the Division Series roster after a disappointing first season in Houston before getting a spot in this round after the injury to McCullers. He allowed seven hits and four runs in four innings Saturday in a performance that certainly isn't good news for a team that is running short on starters.

There's a day off Sunday before Houston's José Urquidy makes his first start this postseason in Game 3 Monday. The Red Sox have yet to name their starter.
Report a correction or typo
Related topics:
sportshoustonmlbhouston astrosbaseballminute maid parksportsboston red sox
Copyright © 2022 by The Associated Press. All Rights Reserved.
HOUSTON ASTROS
Bad Bunny announces stadium tour stop at Minute Maid Park
Robot ump to be used in Sugar Land for 2022 season, MLB sources say
Digging into the process of rebranding Sugar Land Skeeters
Free-agent shortstop Carlos Correa hires Scott Boras to represent him
TOP STORIES
Deputies escort body of fallen HCSO Sgt. to funeral home
Biden confirms he will nominate first Black woman to SCOTUS
Armed driver was trying to rob another driver on Katy Fwy, police say
These jobs are hiring, and they pay more than $14 an hour
Cool temps through the weekend with a warm-up next week
K9 stabbing suspect accused of killing father with dumbbell
No bond granted for suspect in Pct. 5 corporal ambush killing
Show More
Attorney of man questioned in dad's death wants him to seek help
HPD officer's bodycam video released in crash that killed 75-year-old
You could get paid to get your COVID vaccine or booster
World remembers Holocaust as antisemitism rises in pandemic
Notorious gangster reflects 30 years after becoming FBI informant
More TOP STORIES News