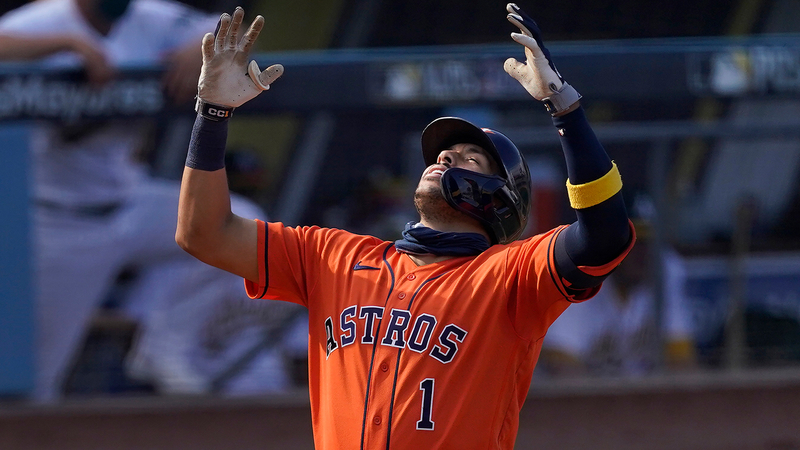 HOUSTON, Texas (KTRK) -- An unlikely contender to advance past the Wild Card, the Houston Astros continued their 2020 postseason journey in Game 1 of the American League Division Series against a bitter rival, the Oakland Athletics.

Oakland got out to a 2-0 lead in the 2nd inning when Khris Davis launched a two-run homer off of Astros staring pitcher Lance McCullers Jr.. The A's followed that up with a solo home run by Sean Murphy in the 3rd to go up 3-0.

Houston tied it up, 3-3, in the 4th inning with a solo homer by Alex Bregman and then a two-run bomb by Carlos Correa.

The Athletics took back the lead, 4-3, in their half of the 4th with a home run by Matt Olson.

McCullers was pulled in the 5th after allowing a hit to the leadoff hitter in that inning, who also advanced to second base on a throwing error to first. The run scored on a sacrifice fly and Oakland extended the lead, 5-3.

But, the Astros mounted a comeback in the 6th inning, when they scored four runs off of hits by George Springer, Jose Altuve and Michael Brantley. They had the lead, 7-5.

Then, Correa added more runs in the waning innings of the game. He solo homered in the 7th inning and drove in a run in the 9th, extending the lead, 9-5.

Yuli Gurriel drove in one more run in the 9th, giving the Astros a double-digit score, 10-5.

To close it out, Astros closer Ryan Pressly induced two pop-ups to Martin Maldonado and struck out a third batter to close the door. Astros have a 1-0 lead in the best-of-five series.

Due to the pandemic, this series is being played at one site: Los Angeles' Dodger Stadium. And given the circumstances, each game of the series are being played in consecutive days with no breaks that would typically be used for travel.


Recent history suggests this is Oakland's series to win, beating the Astros seven out of 10 times.