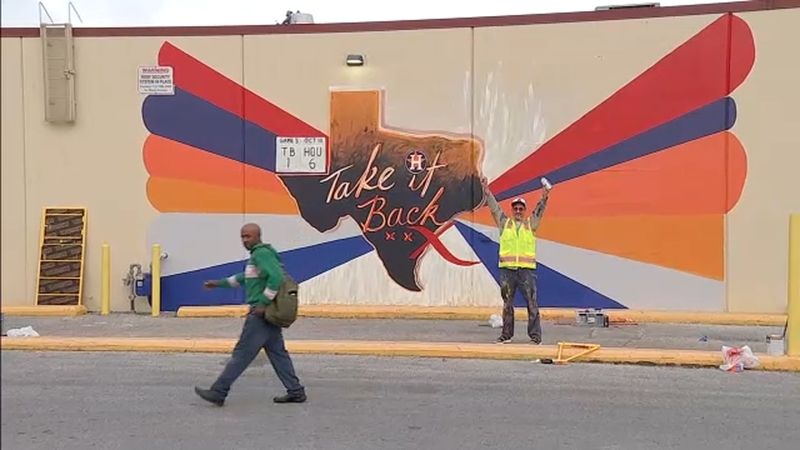 HOUSTON, Texas (KTRK) -- Angel Quesada is a Houston artist whose work covers the side of buildings around the city, certainly in Second Ward.

He said he often focuses on themes in communities, such as heritage, and in some cases, the loss of the past because of gentrification.

On the North Freeway near Tidwell, he has a different work commissioned by the Houston Astros.

"This is kind of confetti and celebration, and reaching out to this community," Quesada said.

The mural is on the side of a sports bar in an older shopping center, facing the freeway feeder.

On it is a rainbow of colors for which the Astros team is known, and the rally call of "Take it Back," referring to its current World Series quest after winning the trophy two years ago.

Quesada said the team commissioned two murals by other artists in the downtown area.

"This is the first outside of downtown," Quesada said. The design was approved by the organization.

"This part of Houston is under-served by arts," Quesada said. "I like to be a bridge to communities." This mural is part of that.

"To bridge communities with the message the Astros want to connect with the people of Houston," Quesada said. "Their fans are everywhere."

The deeper the Astros go in the postseason, the more colorful the city will get. The team planned to have a mural made after each playoff win.