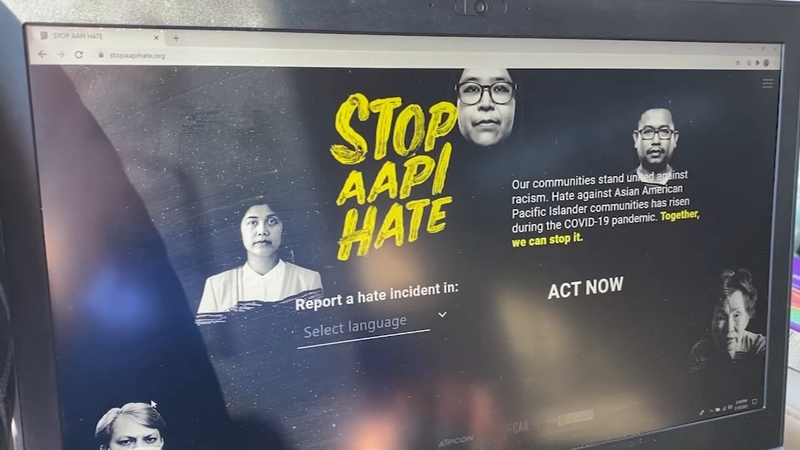 HOUSTON, Texas (KTRK) -- On Thursday, flags were at half-staff at the White House to honor victims of the Atlanta spa shootings.

The Houston Mayor and Harris County Sheriff's Office deputies told ABC13 its departments are increasing patrols throughout the community following the violent shootings in Georgia and an increase of hate crimes and attacks against the Asian American community both across the state and nationwide.

Thu Nguyen, executive director of OCA Houston and local manicurist said there has been a heightened sense of alarm following the violent attacks in Georgia.

"Our store gets broken into," she said. "People have been throwing dead animals at our house over the past year. I talked to my dad I was like, 'Oh, this is weird. This is the pandemic.' He said, 'No, this has been happening for the past five or six years,' and I said, 'Why, didn't you do anything?' He said, 'Well, what are they going to do?'"
The advocacy group Stop Asian American Pacific Islander Hate has reported at least 3,800 anti-Asian hate incidents since March 2020 - when the pandemic hit.

In Katy, Harris County Deputy Khanh Kim and Investigator Hoang Nguyen showed ABC13 how the department is trying to increase police presence as a proactive measure to help members of the Asian American community feel safer in their homes, businesses and community.

"I love to help the community, and that's the reason why I'm here every day," Kim said. "We want to be proactive, not react."

Violent Crime Investigator Hoang said discrimination and hate crimes are underreported and they are trying to build trust within the community.

"A lot of people, like I said, are afraid and they don't want to be involved," Hoang said. "We have to get involved, so we have to go out there and talk to them more and show more presence and try to convince them like, 'Hey, we are here to help you guys so report to us and open up and talk to us more."

HEAR FROM HOUSTONIANS: "That could have been my mom." Asian American Houstonians expressed their grief and concerns following the Atlanta attacks.

"At my request, the Houston Police Department is increasing patrols beginning today near homes and businesses in Houston's Asian community. We are taking these steps following the violence in Atlanta and acts of hate against Asian Americans nationwide.

HPD assures me that there are no credible threats in Houston, nor has our city experienced an increase in hate crimes reported against Asian Americans. However, I understand that many of our neighbors are concerned and fearful for their safety.

Houston's Asian American and Pacific Islander (AAPI) community is beloved throughout the city. They operate successful businesses, support local initiatives, and assist with resources following every disaster - from donations of food and masks during the pandemic to financial contributions to aid recovery after Harvey and other natural disasters.

The shooting that claimed the lives of the AAPI women in Atlanta is an unspeakable tragedy. The spike in hate crimes across the country against the AAPI community is alarming and must end. As mayor and as a Houstonian, I want you to know that I stand with you in grief and solidarity.

It is not enough to condemn these acts of violence against Asian Americans and hold the victims' families in our hearts. We must act to protect them. I am calling on all Houstonians to recognize our AAPI brothers and sisters' pain and fear and do what you can to ease those feelings. Please do your part to make them feel safe, whether it's by reporting a hate crime or calling out anti- Asian sentiment when you see it.

The attacks on the Asian American community are an outrage, and it's on all of us to stop it."