Houston minister and wife struggle to rebuild home after 2019 firefire 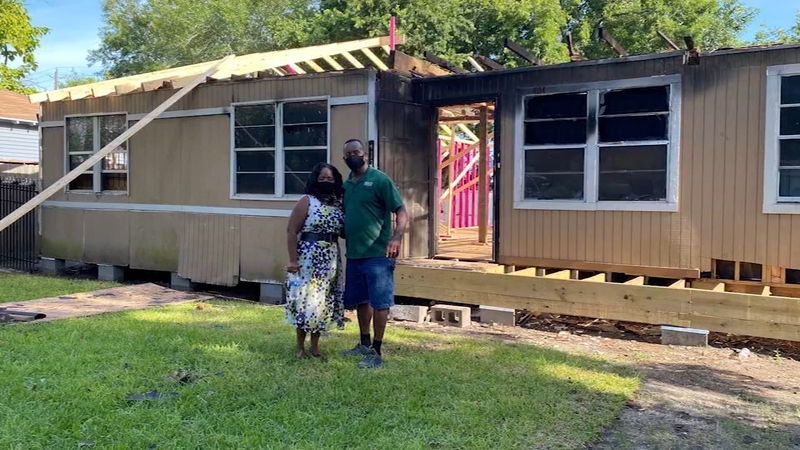 A minister and his wife lost their home, but some good samaritans have stepped in

HOUSTON, Texas (KTRK) -- More than a year after their home burned to the ground, a Houston couple felt like they couldn't catch a break, until now.

"You know, when I see stories like this, about terrible things that happen to good people, I'm not going to sit on the sidelines," said Randy Hartley.

Hartley, an ABC13 Eyewitness News viewer, heard about their story and has decided to donate to help rebuild their home.

"One Sunday evening I decided to do some Spring cleaning," explained homeowner Lavanna Brown.

It was one load of laundry in March 2019 that turned their Phlox Street home in the Sunnyside neighborhood into ash.

"He says get out, the dryer is on fire," explained Brown. "Everything went up in flames."

She and her husband Donald watched their home burn to the ground.

A year and a half later the home is still gutted and signs of the 2019 fire still present.

The home, which was completely paid for, was a purchase for Donald's mother years ago.

When she passed they moved in but could not get insurance.

"Tried to get insurance but found out the house was too old, no one would insure it," explained Brown.

On top of that, someone looted the home, taking jewelry.

Donated lumber was also stolen and designs from an architect were rejected by the city.

"It wasn't what the city wanted and so that was rejected and that was money lost because we couldn't get the money back."

They were able to come to an agreement with a contractor to rebuild only the exterior of the home, windows, doors and roof.

It will cost them $53,000, which is their entire life savings and more.

"They're down on their luck and they could use some help," explained Hartley when he met the Brown's outside their home.

Hartley is donating $1,000 to the Browns and offering to match another $1,000 if the public donates to the GoFundMe page that hasn't garnered much since 2019.

"With these good people I think the generous citizens of Houston will step up and donate," said Hartley.

Lavanna, a dedicated preschool administrator, and Donald, a truck driver, have both served at the Zion Temple Church for more than 23 years.

Donald and Lavanna Brown have continued to work every day since the fire, but because they are also paying for rent on an apartment they say they just cannot get ahead.

If you'd like to help them raise funds, donate to their GoFundMe page here.