Shriners Hospital patient gets to return to Honduras with new limbs, and outlook on life 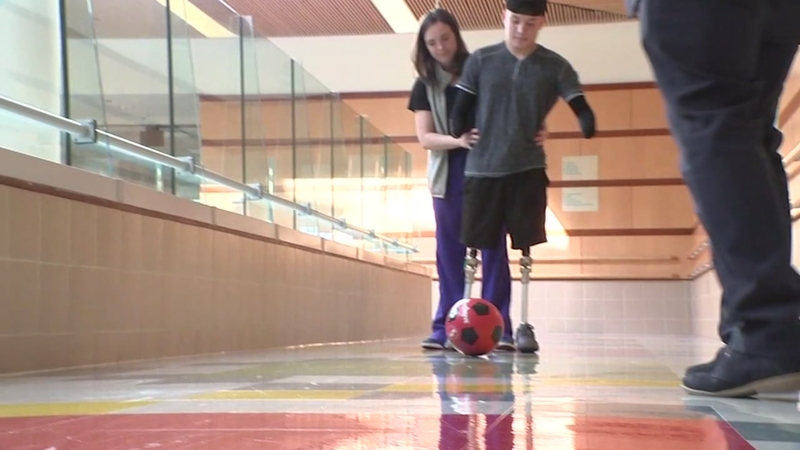 HOUSTON, Texas (KTRK) -- After spending more than a year at the Shriners Hospital, a teenager is returning to Honduras with new limbs and positive outlook.

Last year, Willian, 17, was electrocuted while he was living in Honduras.

An incident that forced doctors to remove his arms and legs.

He went for burn care at the Shriners Hospital in Cincinnati and was later moved to Houston for prosthetic care.

Willian doesn't speak English, but the language barrier was no problem for his doctors and therapist, thanks to his positive attitude and face expression.

"He's never without a smile no matter how hard the exercise is," Shiners Hospitals for Children physical therapist, Melissa Howard said about Willian.

Howard has seen that look a lot. She's worked with him to get to the point of not only walking but playing sports again.

It's a challenge for anyone, but it's even harder for Willian. He also needs to learn how to handle Honduran terrain.

"The sidewalks may not be concrete, and the roads may not be paved, and there are more mountains, and it's not as flat," Howard said.

Shiner's Hospitals for Children in Houston is working with a number of patients from Latin America. The hospital provides care for patients who may not have received it because they don't have insurance.

"Many of the burn cases that come from outside of this country are pretty substantial," Shriners Hospitals for Children patient care services director, Jeannie Keith said. "Kids start working sooner. They have electrical burns that frequently will take off all their limbs and extremities.

Willian will continue his treatment in Honduras. He should be able to walk alone in a couple weeks.

New legs that not only help him get around but serve as a reminder. His new legs feature lightning bolts.

A symbolic gesture that proves nothing can stop him from moving forward. "It's just really fun to be able to see him meet his goals and go back to what he wants to do," Howard said.

And come Friday, there will be no step taken for granted as Willian makes his way home.