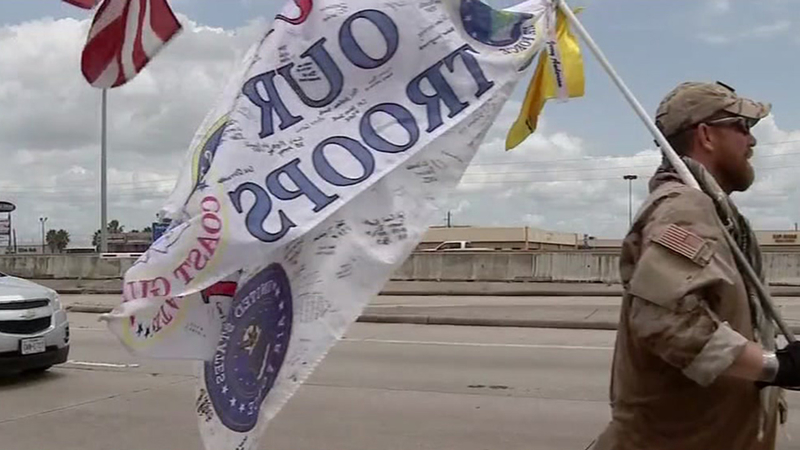 HOUSTON (KTRK) -- For more than a month, Ken Meyers has been walking the highways and freeways of Texas, more than 500 miles and counting. And he's been through hail and high water.

"There were high winds in some of those storms, and tornado warnings," Meyers said.

Meyers though has a higher purpose in his Never Quit March. It's to bring awareness to the issue of post-traumatic stress in veterans and to raise money for the Lone Survivor Foundation.

Meyers served four years in the Air Force, assigned to military police. His assignments, he said, included Honduras and Bosnia. He said he enlisted during the first Gulf War.

Over time, and combined with volunteering as a first responder during 9-11 and Hurricane Katrina, Meyers said he developed PTS.

"At one point I was wondering what good I was to my family," he said. "My safe place was my bedroom."

Therapy brought him out of that dark place, the 44-year-old Meyers said. Now he's paying it forward for others.

A volunteer with the Lone Survivor Foundation, Meyers came up with the idea of the Never Quit March. He started in Conroe last month, walking to Fort Hood, Waco, College Station.

Today, he was on the Interstate 45 feeder north of downtown, heading south.

"I walk 22 miles every other day," he said. "That's for the average number of vets with stress disorder who take their lives everyday. The other days I do 19 miles. That's the number of lives lost on the helicopter crash trying to rescue the Navy Seals in Afghanistan."

"I'm doing it for the Lone Survivor Foundation," he said as he walked. "It goes to the veterans and their families and the retreats for them."

"Yesterday, it got too hot for her feet," he said. "So I had her taken home."

Driving at just over 2 miles an hour behind Meyers, is Floyd Stewart, with the UFW in Conroe. A Vietnam Veteran, he said, "When I came back, they called it shell shock. I jumped behind the couch a few times when I heard loud noises, but nothing like the vets today. I was lucky."

Both Meyers, on foot, and Stewart, behind the wheel of his truck, will end the Never Quit March this weekend at the Texas Frog Festival in Crystal Beach. The event, like Meyers, will raise money for the Lone Survivor Foundation.