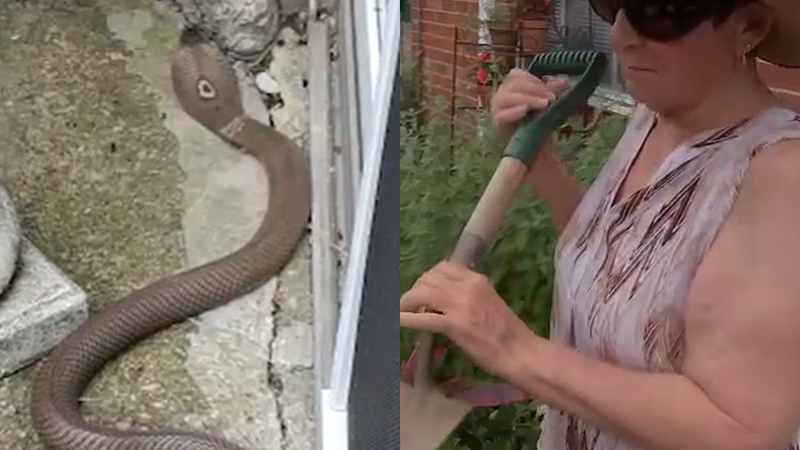 FALLS TOWNSHIP, Pennsylvania -- A great-grandmother found a cobra on her patio but wasn't going to wait around and do nothing until animal control arrived.

I just met this tough-as-nails great grandma who killed a cobra in her Bucks County garden. Yes. Seriously. Her story at 6 on @6abc pic.twitter.com/SGl636xZ2P

Kehoe said blue jays squawking led her to look outside her apartment door. That's when she noticed the cobra.

She snapped a few photos as the snake slithered away. The no-nonsense great grandmother grabbed her shovel and chased after the four to five-foot snake into the yard.

Here is the cobra moments before she took matters in her own hands. 👵🏼 > 🐍 pic.twitter.com/nPYypXC9Cz

"He went this way. I stalked him and when he got over to here, I tapped his tail. He went up and that's when I did the deed and held him there," she said.

Kehoe thinks the venomous reptile may have been roaming around the apartment complex for months. Back in March, authorities removed 20 venomous snakes from a neighboring apartment, including 12 cobras.

Kehoe had worried that some escaped. She says she knew she needed to kill this one to protect kids in the neighborhood.

"I was just concerned for everybody else because not everyone would know," she said.

Police told Action News that it's unclear whether the snake is connected to the apartment that was raided in March.

What is clear though is that Kehoe is terribly lucky she didn't miss.

Wildlife veterinarian Dr. Susan Tyson-Pello of the Mount Laurel Animal Hospital warned that most snake bites occur when someone tries to attack or capture the reptile.

Tyson-Pello recommends that if you see a venomous snake to leave it alone and contact authorities.

Nonetheless, Kehoe has earned the respect of her neighbors.