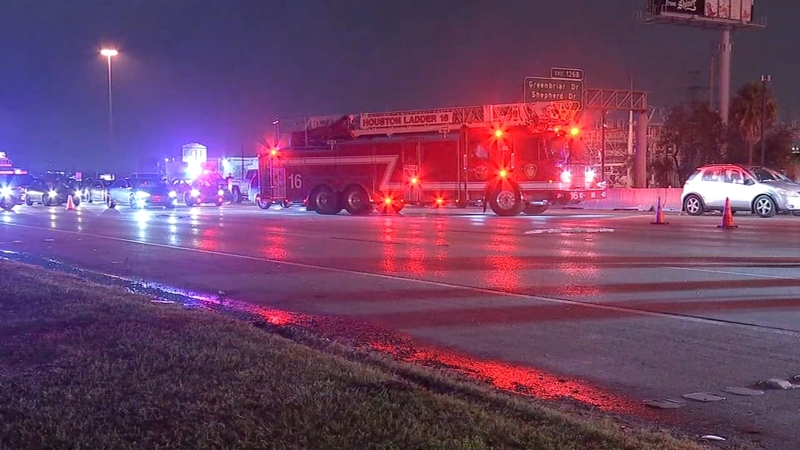 It happened around 1:30 a.m. on Southwest Freeway near Kirby Drive. Police say the man was in the outbound lanes near Kirby when he was struck. Officers weren't sure if he was running across the freeway or exactly why he was on the road.

At least one car struck the man and took off, Houston police said.

Police said there were no witnesses or any pieces of the car that may help identify the driver.

Police are asking anyone who saw the crash or knows anything to come forward. Police always warn no one should walk or run on any of Houston freeways.

The victim had not yet been identified, as of Saturday morning.

Saturday's crash was the latest in a series of deadly hit-and-run crashes in the Houston area. On Jan. 10, an 89-year-old man was struck and killed in north Houston.

A 75-year-old man was also struck and killed on Jan. 15 in front of his Gulf Bank home. His family is offering an $8,000 reward for information that leads to an arrest in that case.
Report a correction or typo
Related topics:
houstontraffic fatalitieshit and runpedestrian killedfatal crashman killed
Copyright © 2021 KTRK-TV. All Rights Reserved.
TOP STORIES
Man reportedly wanted for murder captured after ditching car in chase
CDC reverses course on indoor masks in some parts of US
Watson investigation ongoing, but no limits placed on QB, NFL says
Man seen peeking through windows before breaking into apartment
Friendswood officer under review fights back in court
Cooling downpours Tuesday bring heat relief to some
Judge tosses suit that sought to end UT-Austin's affirmative action
Show More
Simone Biles explains why she 'took a step back' from team finals
Police searching for purse snatching suspect in west Houston
Don't rely too much on that 'miles-to-empty' warning for gas, AAA says
Walmart will cover 100% of college tuition for its workers
Texas and Oklahoma formally ask to become members of SEC
More TOP STORIES News