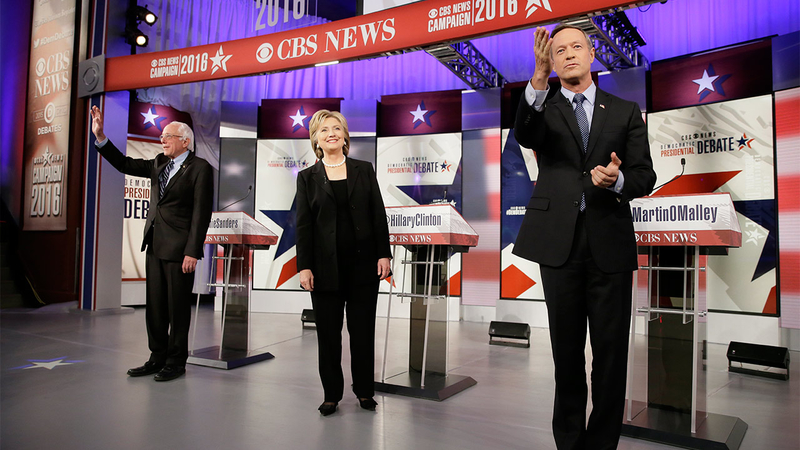 On a cold New England morning, staff and volunteers for Hillary Clinton's New Hampshire campaign were up and at it. Erica Borsack, who attends Colgate University in New York, was among them.

"We're getting really excited for the debate tonight and Go Hillary," she said during an interview at the entrance to St. Anselm's College in Manchester where she and two dozen other supporters stood holding large campaign signs.

She's ready for a nationally televised debate tonight on ABC.

"Everyone is really concerned about national security and one of the reasons I support Hillary is all of her support for women's issues," she said.

Amongst the cadre of Clinton supporters, we found a pair of Martin O'Malley backers. The optics of their small presence among the Clinton throng -- consistent with the former Maryland Governor's support nationally in a three person race. For volunteer Bob Evans, tonight is a big opportunity for his candidate.

"I really think he's a unique candidate with a youthful energy, said Bob Evans, who arrived here from New Jersey," said Evans. " "We all know something on national television is important and we really feel the governor is going to rise to the occasion. "

This is, however, the one early state, where Vermont Senator Bernie Sanders is leading. His staffers working hard to turnout supporters at a debate watch party. We found them working late on Friday night in their state field office.

All of this is comes against the backdrop of a political scandal. The Sanders campaign accessed the Clinton team's voter database through a computer glitch. The DNC suspended Sanders access, but on Saturday DNC chair Debbie Wasserman Schultz told Eyewitness News they're moving past it.

"We've turned on access to the voter file because they have now complied and answered our questions and agreed to fully cooperate in an independent investigation," said the congresswoman from Florida in an interview at the debate site.

This is the third Democrat debate and it comes less than eight weeks before voters go to the polls here in New Hampshire. It could provide a last big window into these three candidates , where they stand, and how they'd govern. One of them will emerge the winner, leaving the other two out in the cold.