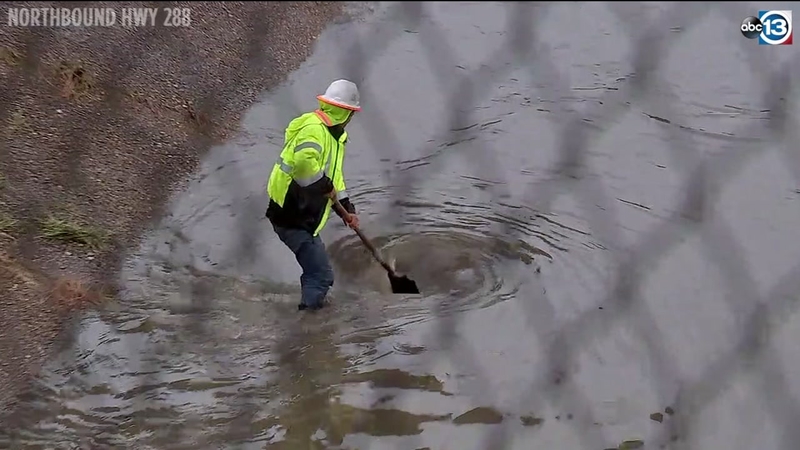 HOUSTON, Texas (KTRK) -- Not all heroes wear capes, and one in particular was equipped with a hard hat and a shovel.

Severe weather aimed to disrupt Halloween night plans throughout the greater Houston area, and a major symptom of that was street flooding that plagued major roadways and freeways in the city.

Highway 288 was a big problem spot on the Wednesday evening commute. The northbound lanes heading toward downtown Houston were covered in standing water as the rainfall persisted.

It took one person, though, to quickly locate the problem, clear the appropriate drain of debris and, like any superhero, walk away, never to be seen again.

ABC13 reporter Deborah Wrigley captured the man who was already working to get the drain cleared in knee-deep water. The man, who was also wearing a bright neon vest, fished around for the problem for a while before coming up and tossing away landscaping clippings and pieces of a shredded tire.

As a result, the unclogging caused a vortex of water to come down just like a bathtub at home.

When ABC13's newscast returned to Wrigley at the same scene minutes later, traffic was flowing again on the northbound lanes, without the standing water in sight.

According to our reporter, a white truck that had no decals on the side came by to pick up the worker. We do not know whether he was a public works employee or just someone who took it upon himself to solve a problem. During the whole emergency ordeal, Wrigley tried to get a word with the hero, who declined to talk because, of course, work was being done.
Report a correction or typo
Related topics:
traffichoustonfloodingweatherhouston flood
Copyright © 2022 KTRK-TV. All Rights Reserved.
HOUSTON FLOOD
Harris Co. estimates $30 billion price tag on possible flood project
Texas has 10 days to fix Harvey plan that gave Houston $0, feds say
Effects of Tax Day flood linger in Houston-area neighborhoods
A billion dollars in flood work complete, still much more to do
TOP STORIES
Shell Freedom Over Texas returns to Eleanor Tinsley Park this July 4
Highland Park parade shooting victims range in age from 8 to 85
Person on interest taken into custody after 6 killed in IL shooting
2 14-year-old girls from Central Texas at center of Amber Alert
Stay hydrated! Very hot temps in store for your July 4
25 acres of land burned after grass fire near Spring Cypress
Joey Chestnut, Miki Sudo win Nathan's Hot Dog Eating Contest
Show More
Site of drive-by shooting has history of violence, data shows
Family of 17-year-olds killed during pool party speak out
Calls from Texas flood New Mexico abortion clinic, wait time grows
Body recovered during search for man who went missing near Tiki Island
Family pleads for release of Houston dad held in Russia
More TOP STORIES News