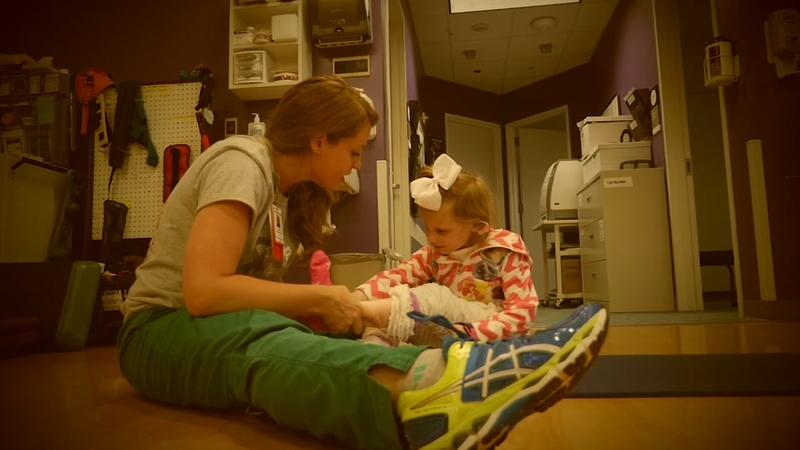 HOUSTON (KTRK) -- Many say four-year-old Lillian's survival is nothing short of a miracle.

"We went to her pediatrician for her 6-month well exam, and at that time they noted she was behind on her milestones," her mother, Sandra Salerno said.

Lillian's parents were told her head circumference was smaller than normal. So an MRI was needed for further examination.

"She also had permanent profound hearing loss in her left ear. And then also on top of that, we learned that she was literary having hundreds of seizures a day," Sandra told us.

Sandra said, "While I was pregnant in my second trimester, I had kind of a respiratory type illness."

According to Pediatric infectious disease specialist, Dr. Gail Demmler Harrison "the virus can get to the baby, and it can often have devastating results."

Dr. Demmler says fetuses exposed to CMV may experience various disabilities. In Lillian's case, the right side of her brain had not fully developed. She was placed on medications to control the seizures and slow down the hearing loss.

"When you're having literary hundreds of seizures a day and maximum support doesn't really touch it, you come to the very difficult decision that the seizures, she may lose her life to these seizures," Dr. Demmler said.

So doctors came to the conclusion that there was only one option left, and had to deliver that news to Lillian's parents.

Dr. Demmler said, "The very difficult decision was made after intense medical therapies to do a hemispherectomy, which it to literary to scoop out half the brain."

Lillian had the procedure in August of 2013. More than a week after surgery, there were signs of hope.

Sandra said, "My older daughter showed her how to crawl again and we have a video of her crawling across the hospital floor, 10 days after her hemispherectomy."

Since then, Lillian has made great progress on her long road to recovery.

"Through therapies you train the part of the brain that's there to take over not only the right side of the brain that works well, but also the left side of her body that's still challenged," Dr. Demmler told us.

"This is our home and this is the team that helped our daughter and gave her a chance for a life that we feel that she never would have had," Sandra said.