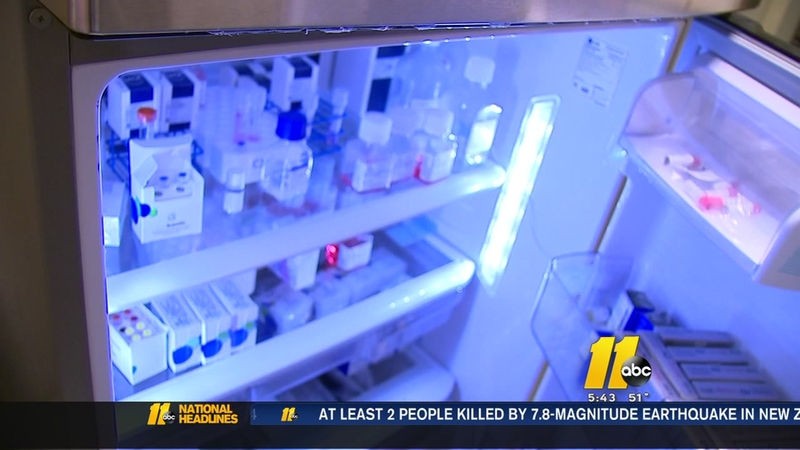 RALEIGH, NC -- When you're desperate to have a baby, many couples will try anything. ABC11's I-Team uncovered some couples in the Triangle even turning to the black market to buy fertility drugs.

It's no secret In Vitro Fertilization (IVF) is expensive. The cost ranges from $10,000 to $20,000 for just one treatment cycle and medications. While some insurance companies pay for it, many do not which leaves couples struggling to afford the costly treatments.

Elka and Brian Anstey spent 3 long years trying to get pregnant and to get their son, Miles, a little brother.

"Whatever it takes. We have to figure this out. I got pregnant before, I can get pregnant again," Elka said.

She went through several fertility procedures that were costly. The Anstey's both work, but neither insurance covered the costly IVF procedures. They took out a loan from their bank for $36,000 to pay for all of the treatments and medications.

The second IVF cycle was successful. While all of the fertility treatments were expensive, it was worth it for the Anstey's as they now are able to hold their 4-month-old baby, Langston.

"It's hard to complain about getting up a night as we waited so long for that opportunity to do so," Elka said.

While the Anstey's went through their doctor's office for all of their fertility medications, the I-Team discovered the high cost of IVF has some couples turning to the black market for the drugs. We founds dozens and dozens of people selling their leftover fertility drugs online for a fraction of the original cost.

While it is illegal to sell medications, it's not stopping people. We reached out to several of the online sellers, and we had a hard time finding one that didn't already sell the drugs.

Dr. Bill Meyer with Carolina Conceptions says he understands the financial struggle, but he says buying blind from someone you don't know is a big risk.

"My concern would be really the consistency. How they've been stored, and their expiration dates," Dr. Meyer said.

Two of the sellers did send us photographs of their fertility drugs expiration dates. One seller even sent us how the drug was being stored in their refrigerator. Dr. Meyer says there is still the risk of tampering and lack of medical expertise.

"I think it would just be dangerous to do. It's the unknown, and we're really trying to get egg quality in a lot of these cases is the key thing," Dr. Meyer added.

Besides turning to the black market, Dr. Meyer says some couples are also going online to try and buy the fertility drugs from Europe or Canada. He says the risk is just as big there, as these drugs don't have to meet the same FDA guidelines or safety.

He says there is also the risk that the drugs can get stopped by customs coming into the states.

Elka and Brian both said they were aware that fertility drugs were sold on the black market and even traded in fertility chat rooms, but it was a risk they were not willing to take.

Elka added, "God forbid there was something wrong or something had happened."

While they will be paying off the $36,000 IVF loan for years, they wouldn't have it any other way.

"I live a very blessed life, and I appreciate that and he reminds me of that more than anything," Elka added.