HBCU life? Inside look at why enrollment is on the rise at several universities 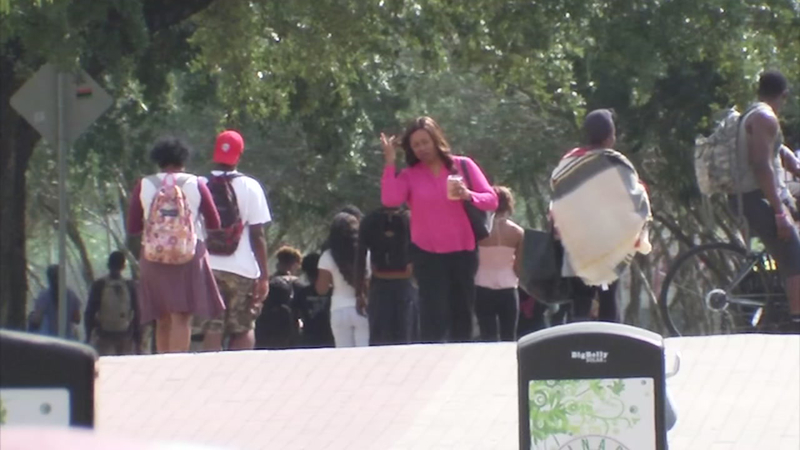 Enrollment on the rise for several black colleges across the nation

HOUSTON (KTRK) -- When it comes to choosing a college, there are a lot of options students must weigh. Those include the price of tuition, class size and student life. But now a number of Historically Black Colleges and Universities (or HBCUs) are seeing an uptick in enrollment, including two here in the Houston area: Texas Southern University and Prairie View A&M.

HBCUs were established in the early 1800's and since then enrollment at these schools has gone up and down over the years. But now, instead of accepting admission to predominately white schools, more black students are opting for schools where the majority of students look like them.

Texas Southern University is one of the 100 HBCUs throughout the country. It's one of a growing group that has recently seen a jump in enrollment because of students like Anthony Collier.

"UH, Sam Houston State University, University of North Texas and a couple of other schools. But eventually I narrowed it down to TSU and Prairie View, and I chose TSU," Collier said.

Prairie View A&M is in the same boat thanks to students like freshman Castity Fields.

"I was accepted to UT-Austin, University of Mary Hardin-Baylor, Hofstra University in New York," Fields said.

Both turned down the offers from larger, predominately white universities (PWIs) for historically black schools.

"Being surrounded by so much black ingenuity, intellect, intelligence, and excellence," Collier added. "It defies the stereotypes and it shows the truth, the essence of black Americans."

Fields says her decision was shaped by the "racially divided" America she saw after the 2014 shooting death of Michael Brown in Ferguson, Missouri.

Marybeth Gasman, a researcher with the University of Pennsylvania, says nearly a third of HBCUs have seen at least a 20 percent increase over the past three years. The increase correlates with the acquittal of George Zimmerman and the highly charged protests across the United States.

At TSU, undergrad enrollment jumped by 770 students between 2013 and 2014. Those numbers have leveled off.

Prairie View A&M saw its highest enrollment ever this semester at 8,848.

"We've learned there are students among our population who, because of the things that were going on, wanting to be in an environment where they felt comfortable, where they felt safe," Prairie View A&M Provost Dr. Felicia Nave said.

"For our boys, in particular, is definitely where I see this shift happening," adds Sharoma Scurry-Graves.

Scurry-Graves and her husband run the Axis Youth Network, a non-profit that works with minority students in north Houston.

She tells Eyewitness News some of her students are scared of a world they perceive as not accepting. She shared the story of one graduating senior.

"He was interested in going to UH and staying close to home," she said. "Now he's looking at the PVs and the TSUs where before that really wasn't an option because that was just the school next door."

PWIs like the UT-Austin and the University of Houston have both seen an increase in black undergrads from one year to the next. At UT-Austin, there were 1,941 black undergrads in the fall of 2013. This year there are 1,962. At UH, black enrollment has gone from 3,816 in 2013 to 3,924 this semester.

Students like Collier say decades removed from HBCUs being the only choice for black students, they're become the first choice more often now.

"I believe that any black person who aspires to be a college graduate, even if you plan on going to a PWI for graduate school, you should always have a HBCU foundation to stand on," he added.