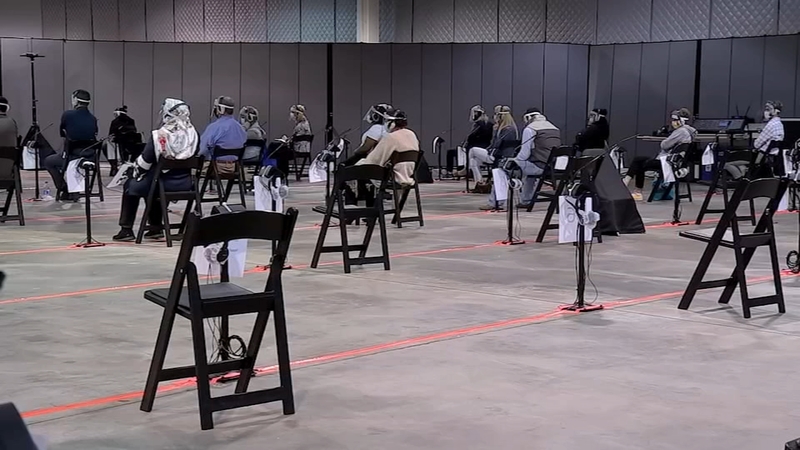 HOUSTON, Texas (KTRK) -- There are tens of thousands of criminal court cases in Harris County that are ongoing. Many are bogged down in the system. The pandemic only added to further delays and increased the already existing backlog.

Now some trials are resuming. This time, though, potential jurors are being summoned to appear at NRG, which allows for increased social distancing.

"This is where the panel reports. It's about 300 people," said Kim Ogg, (D)-Harris County District Attorney.

Ogg showed ABC13 around one of the arenas in NRG. It usually features activities for the Houston Livestock Show and Rodeo and other events. But now, it has been converted into a jury selection room of sorts.

As Ogg showed us around, she was pretty familiar with the process at NRG. That's because she just experienced it herself. She received a summons.

"Like everybody else, I get a jury summons," said Ogg.

She said it feels it's an important service.

"I think it's important for me to serve. In reality, I wasn't picked, but I showed up," she said.

With part of NRG now converted into a courtroom-type setting, Ogg took us through the summons process.

"I received my jury summons. I got online, as instructed (and) I qualified," she said.

If you qualify, the second step is to show up. You start in a large, socially distanced arena before going into a makeshift courtroom.

"We use these clear face shields and microphones at each individual juror's station in the makeshift courtrooms and it works," she said.

The individual microphones prevent people from having to shout. It's a safer way to get trials going again. After all, there's been a huge backlog in cases, dating all the way back to Hurricane Harvey. At the time, the city's severe flooding forced courts to close and put cases on hold.

"In the criminal justice system we have been so backlogged for the last four years because of Harvey, COVID, the freeze, all of these disasters make for fewer trials," Ogg said. "The fewer trials, the larger the caseload. So we're encouraging, urging judges to call juries."

With the backlog, this means families of victims are waiting for trials and those charged with crimes are waiting in jail.

"There are 5,000 people in the Harris County jail charged with violent crimes," Ogg said. "Right now, there are tens of thousands out on the street on bail for a variety of crimes."

While Ogg wasn't picked for the jury when called upon, she was glad she was able to take part in the process.