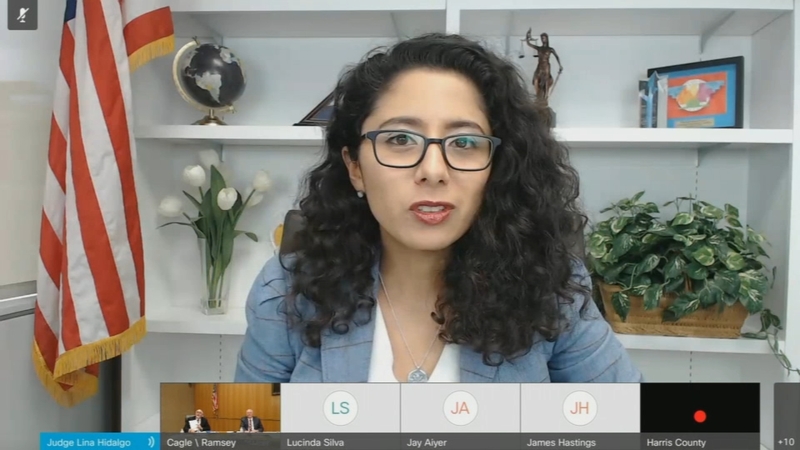 HOUSTON, Texas (KTRK) -- Harris County Sheriff Ed Gonzalez, who's being nominated by President Biden as the next Director of Immigration and Customs Enforcement, is considered a priority for the White House.

Within minutes of the annoucement, Harris County Judge Lina Hidalgo tweeted her well wishes. "Congrats to my friend Sheriff Ed Gonzalez on being nominated to run Immigration and Customs Enforcement for the Biden Administration. I'll be sad for him to leave us, but President Biden will gain a compassionate, thoughtful and courageous leader."

Congrats to my friend Sheriff Ed Gonzalez on being nominated to run Immigration and Customs Enforcement for the Biden Administration. I'll be sad for him to leave us, but President Biden will gain a compassionate, thoughtful and courageous leader. @SheriffEd_HCSO

Also on Tuesday afternoon, Harris County Comissioner Adrian Garcia spoke out on what qualifications Gonzalez could bring to the role.

"I think this is a great opportunity for so many to move the mission of immigration enforcement in a better direction," Garcia said. "I think bringing a local law enforcement official -- and not just any, but one who has a perspective on community engagement, smart policing, transparency and working with stakeholders -- I think it's going to be a great day for the country."

As word got out of Sheriff Ed Gonzalez's nomination to lead ICE, Harris County Commissioner Adrian Garcia gave reasons that the sheriff's nod will "benefit everyone."

"We have worked with Sheriff Gonzalez for a number of years and what we can attest to is the fact that he has been and continues to be a man who listens to and takes input from the community," said FIEL Executive Director Cesar Espinosa. "We understand that the role he is about to undertake is a huge and controversial role and we wish him well in this endeavour. However, we have some things we would not like to see again, such as massive raids, lack of prosecutorial discretion and continued separation of hard-working families."

The statement went on to express a list of items the group wants to see as policy changes.

"1. We would like a more just and uniform application of prosecutorial/administrative relief. 2. No more massive raids which send a shockwave of fear into our communities destroying community and government relations. 3. A definite end to the 287G program and secure communities which are policies that Sheriff Gonzalez understands hurt communities. 4. Treat people more humanely by suspending the use of ankle monitors for people who do not pose a flight risk. 5. Ending the 'Collateral Damage' policy when it comes to ICE enforcement in our communities. We are hopeful for a more positive future for ICE and at the end that we will see the agency's power diminish as we move forward on immigration reform," the statement read.

Gonzalez, a lifelong Houstonian, has served as sheriff of the largest sheriff's office in Texas since initially winning election on Nov. 8, 2016.