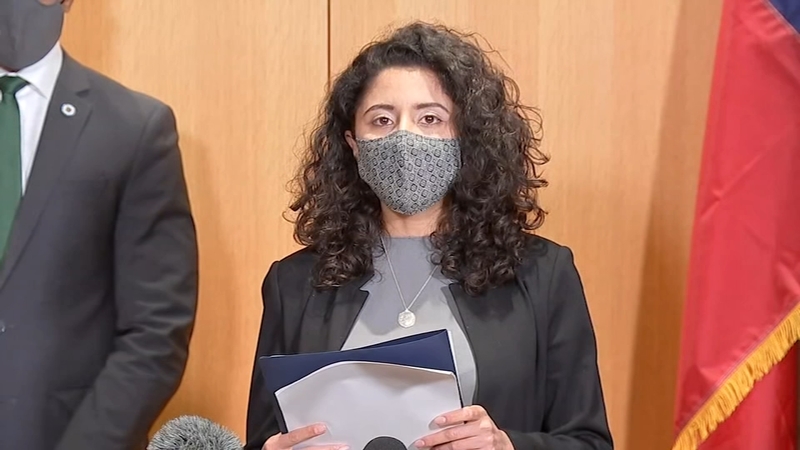 HARRIS COUNTY, Texas (KTRK) -- Harris County Judge Lina Hidalgo's political future is on the line for 2022. She's facing challengers from within her own party, and a crowded GOP field.

"I'm focused on what works, what's going to make a difference. I hope and I trust. I'm confident that based on that we will be re-elected," said Hidalgo on Feb. 2 when asked about her re-election. "All I can do to sleep well at night is do my very best. If that yields a good electoral outcome, great. If it's not what people want to see, that's Democracy. So I'm not going to change my tact for the sake of politics as some people are doing."

Opponents appear to be running on a tough on crime approach. They argue under the progressive politician's leadership the county is a more dangerous place.

Hidalgo dismissed the criticism leveled against her as politics at their worst.

Early voting in the March primary begins on Valentine's Day.

"For people to spend their time playing politics over these dead bodies is despicable," said Hidalgo. "It's sad. It's unfair. It's inappropriate."

Erica Davis, a Democrat, is one of several contenders trying to oust Hidalgo and win the nomination in the March primary.

"We cannot afford another four years of ineffective and inefficient leadership," said Davis. "We have to have leadership that engages the community. I ask the voter. When have you seen the current judge in your community?"

"What are our headlines? Crime and a body count. It's unacceptable," said Mealer. "We have utter lawlessness in the county. The homicides get the headlines. How many carjacking's are there? How many break-ins there? We don't even talk about all the property theft."

Humble ISD's school board president Martina Lemond Dixon is another Republican working to win the March primary. She said public safety including crime and flood control needs to be prioritized above all of us.

RELATED: Texas' primary election is March 1, here's what you need to know to vote

"I just cannot stand what I'm seeing. I know there is a better way," said Dixon. "If the current county judge comes out of her primary, one thing I will say, if we do want to see a change in Harris County, I am the biggest threat to make that happen."

Early voting in the March primary begins on Feb.14.