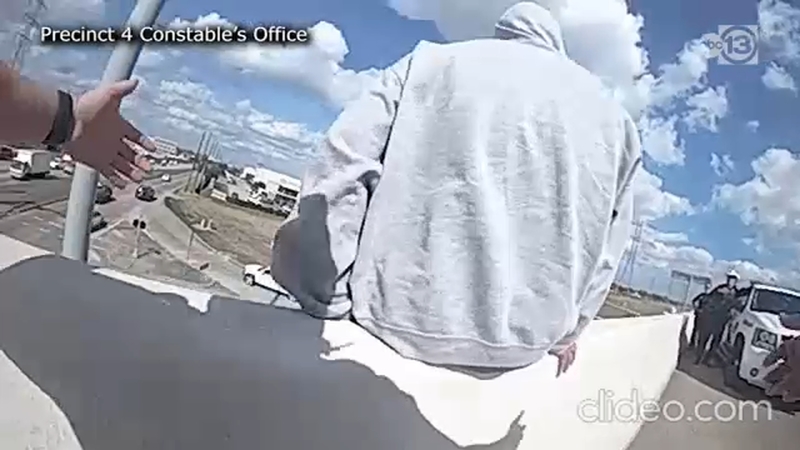 Deputy pulls to safety suicidal man on edge of Beltway

HOUSTON, Texas (KTRK) -- A man threatening to jump off of an overpass in northwest Harris County was pulled to safety by a deputy, and that rescue was captured in multiple camera angles this week.

According to the Harris County Precinct 4 Constable's Office, the ordeal took place Wednesday on the North Sam Houston Parkway near Bammel.

"He took that as an opportunity to move in and basically grab him off the overpass and no doubt saved the individual's life," Constable Mark Herman said.

The man was then pinned to the ground with other deputies giving Deputy Netro backup.

The man was taken to a psychiatric facility for treatment, according to the constable's office.

"Thank you Deputy Netro for risking your life to save a life and great work by all deputies on scene who were able to calm the male down prior to Deputy Netro's arrival," the constable's office posted on Facebook.

The ordeal was captured from a Houston TranStar camera and a body-worn device on Deputy Netro. The footage can be seen in the video player above.

We know people are struggling right now. There's been a lot of job loss. Income has run out for some and families have been torn apart. No matter what you're facing, Constable Herman says don't give up.

A first-hand view from a deputy's bodycam shows his arms coming out to pull a man in distress away from the edge of the North Beltway.