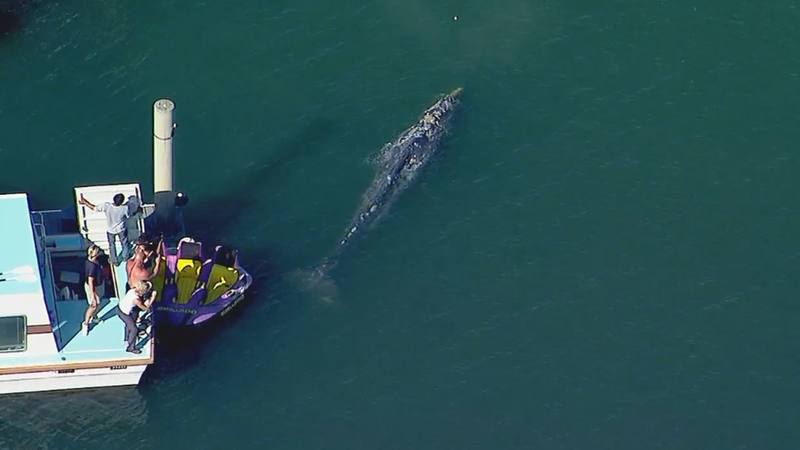 LONG BEACH, California -- A 20-foot-long juvenile gray whale drew a crowd of observers Monday after it was spotted swimming in shallow waters off Belmont Shore.

A juvenile gray whale was spotted swimming in the shallows off Belmont Shore in Long Beach Monday.

Officials said they've been tracking the whale since it was separated from its mother off the San Diego coast earlier this month.

"I don't know how many times I kept on saying it was incredible," said young Vera Kazerouni. "It was so cool. I've never seen a whale like that."

According to fire officials, that whale was last seen swimming out to sea around 7:45 p.m. Sunday.

"They have noticed the whale doesn't have a lot of weight on," said marine safety Capt. Cameron Abel of the Long Beach Fire Department. "It's starting to show less muscle mass and ribs sticking out, so it's not in good condition."

This is the latest in a spate of juvenile gray whale sightings along the Southern California coast.

A baby gray whale was seen off the Dana Point shoreline earlier in August and, with a little help from paddleboarders and Orange County Sheriff's Department officials, eventually swam back out to sea.