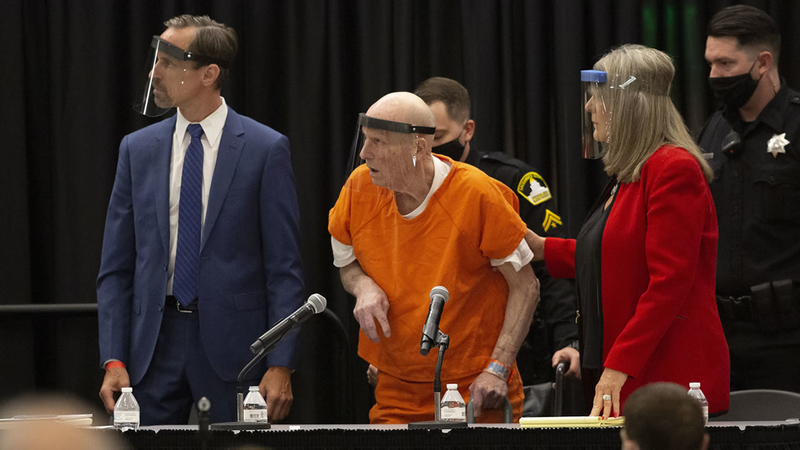 SAN FRANCISCO, California -- A former police officer who terrorized California as a serial burglar and rapist and went on to kill more than a dozen people while evading capture for decades pleaded guilty Monday to murders attributed to a criminal dubbed the Golden State Killer.

Joseph James DeAngelo Jr. had remained almost silent in court since his 2018 arrest until he repeatedly uttered the words "guilty" and "I admit" in a hushed and raspy voice as part of a plea agreement that will spare him the death penalty for a life sentence with no chance of parole.

DeAngelo, 74, had never publicly acknowledged the killings, but offered up a confession of sorts after his arrest that cryptically referred to an inner personality named "Jerry" that he said forced him to commit the wave of crimes that ended abruptly in 1986.

"I did all that," DeAngelo said to himself while alone in a police interrogation room after his arrest in April 2018, Sacramento County prosecutor Thien Ho said.

"I didn't have the strength to push him out," DeAngelo said. "He made me. He went with me. It was like in my head, I mean, he's a part of me. I didn't want to do those things. I pushed Jerry out and had a happy life. I did all those things. I destroyed all their lives. So now I've got to pay the price."

The day of reckoning had come for DeAngelo, Ho said.

"The scope of Joseph DeAngelo's crimes is simply staggering," Ho said. "Each time he escaped, slipping away silently into the night."

DeAngelo, seated in a wheelchair on a makeshift stage in a university ballroom that could accommodate hundreds of observers a safe distance apart during the coronavirus pandemic, acknowledged he would plead guilty to 13 counts of murder and dozens of rapes that are too old to prosecute.

The large room at Sacramento State University was made to look like a state courtroom with the seal of the Sacramento County Superior Court behind the judge's chair and U.S. and state flags on the waist-high riser that served as a sort of stage for a proceeding that had a theater-like feel. Large screens flanked the makeshift stage so spectators in the ballroom could follow the livestreamed hearing.

Temperatures were taken of everyone in the room and even the judge wore a mask at times when he wasn't speaking.

DeAngelo, who wore orange jail scrubs and a plastic face shield to prevent possible spread of the virus, listed to one side and his mouth appeared agape as prosecutors read graphic details of crimes, where he raped and killed and then snacked before leaving.

Family members wept as the proceeding went on for hours. A pile of used tissues sat on the floor next to Jennifer Carole, whose father, attorney Lyman Smith, was slain in 1980 with his his wife, Charlene Smith, who was raped before being killed.

DeAngelo, a Vietnam veteran and a grandfather, had never been on the radar of investigators who spent years trying to track down the culprit.

It wasn't until after the crimes ended that investigators connected a series of assaults in central and Northern California to slayings in Southern California and settled on the umbrella Golden State Killer nickname for the mysterious assailant.

Police used DNA from crime scenes to find a distant relative through a popular genealogy website database then built a family tree that eventually led them to him. They tailed DeAngelo and were able to secretly collect DNA from his car door and a discarded tissue to get an arrest warrant.

The retired truck mechanic was arrested at his home in the Sacramento suburbs - the same area he terrorized in the mid-1970s, earning the title East Area Rapist.

Prosecutors detailed sadistic acts he committed after slipping into homes undetected and surprising couples in bed by shining a flashlight in their faces and threatening to kill everyone in the house - including young children - if they didn't follow his orders.

The masked prowler initially said he only wanted their money to earn their cooperation. He would have the women bind their husbands or boyfriends face down in bed with shoelaces, and then he would bind the women. Victims described being prodded by the barrel of a gun or the tip of a knife.

He piled dishes on the backs of men and said they would both be killed if he heard the plates crash while he raped the woman.

At a home in Contra Costa County in the fall of 1978, he told a woman he would cut her baby boy's ear off if she didn't perform oral sex after he had raped her.

"I admit," DeAngelo said after the prosecutor read the description of that crime.

He stole whatever he could find, sometimes a few bottles of Budweiser and some cash, other times diamond rings. He slipped off into the dark on foot or by bicycle and even managed to evade police who at times believed they came close to catching him.

He started on the police force in the San Joaquin Valley farm town of Exeter in 1973, where he is believed to have committed his first break-ins and first killing.

DeAngelo was among the officers trying to find a serial burglar in the neighboring city of Visalia responsible for about 100 break-ins.

Community college professor Claude Snelling was killed by the suspected "Visalia Ransacker" after trying to prevent him from kidnapping his 16-year-old daughter.

After three years on the force, DeAngelo moved back to the Sacramento area, where he got a job with the Auburn Police Department in the Sierra foothills. He held that job until 1979 when he was caught shoplifting dog repellent and a hammer - two items that could be of use to a burglar.

DeAngelo killed a couple walking their dog in a Sacramento suburb in 1978, but the majority of murders came after he left the police force and moved to Southern California.

A guilty plea and life sentence avoids a trial and even a planned weeks-long preliminary hearing. Victims will be able to confront DeAngelo at length during an August sentencing expected to last several days.

Gay and Bob Hardwick said they wanted to hear DeAngelo admit attacking them in 1978. They felt a life sentence was appropriate given DeAngelo's age and a moratorium on executions by Gov. Gavin Newsom.

"He certainly does deserve to die, in my view, so I am seeing that he is trading the death penalty for death in prison," she said. "It will be good to put the thing to rest. I think he will never serve the sentence that we have served - we've served the sentence for 42 years."
Report a correction or typo
Related topics:
californiarapetrialgolden state killermurdercourtkidnappingcourt caseu.s. & worldserial killerdeath penalty
Copyright © 2022 by The Associated Press. All Rights Reserved.
GOLDEN STATE KILLER
How the 'Golden State Killer,' a serial rapist, murderer, evaded capture for decades
Golden State Killer sentenced to life for 26 rapes, slayings
Death penalty sought in case against suspected 'Golden State Killer'
Accused Golden State Killer charged in another 1975 murder
TOP STORIES
We have a cold and damp night ahead
Winter blast felt across Texas
Major crash blocks southbound lanes of I-45 in The Woodlands
TxDOT crews prepared as temperatures continue to drop
Man killed during attempted robbery of woman he met online, HPD says
Feud over woman led to fight and deadly shootout, family says
Vanessa Guillen legislation celebrated in Houston
Show More
Here's how you can break into Houston's aerospace industry
Reporter hit by car on live television, but continued reporting
3 teens found dead in Crosby home identified
Woman stopped at intersection robbed when man punches window
Family wants teen's bond revoked in alleged love triangle murder
More TOP STORIES News