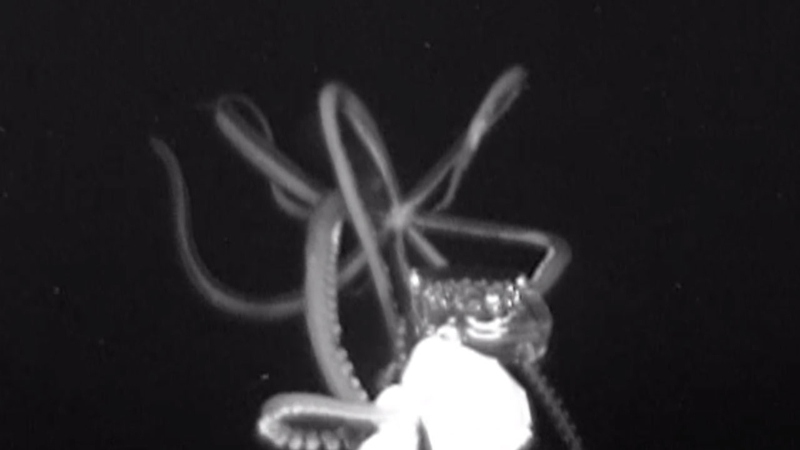 NEW ORLEANS -- An elusive giant squid has made a rare on-camera appearance, delighting scientists on the prowl for the deep-sea creature that until relatively recently had largely escaped the eyes of researchers.

Researchers working with NOAA's Office of Ocean Exploration and Research spotted the creature just 100 miles off the coast of New Orleans in the Gulf of Mexico earlier this week. They identified it in footage taken from Medusa, an underwater camera system that features a lighting system designed to mimic a bioluminescent jellyfish. Medusa can dive as low as 6,560 feet below the surface.

Footage released by NOAA shows the giant squid approaching Medusa, its tentacles flaring as though it had mistaken the camera for an actual jellyfish and was preparing to pounce. After beginning to wrap its tentacles around Medusa, the squid quickly realized something was not right and darted back off into the dark depths of the ocean.

Writing on NOAA's website, Duke University Professor Sonke Johnsen and Ocean Research & Conservation Association CEO Edie Widder noted that the squid was spotted in an area that was often depicted in old maps as containing "monsters" with warnings to sailors in the area.

"We did not find a monster. The giant squid is large and certainly unusual from our human perspective, but if the video shows anything of the animal's character, it shows an animal surprised by its mistake, backing off after striking at something that at first must have seemed appealing but was obviously not food," Widder and Johnsen said.

They continued: "Our perspective as humans has changed. What were once monsters to be feared are now curious and magnificent creatures that delight. We like to feel that science and exploration has brought about this change, making the world less scary and more wondrous with each new thing we learn."

Because of its deep-water habitat, the species has long managed to elude scientists. Images of a living giant squid in its natural habitat weren't taken until just over a decade ago; until then, scientists relied mainly on carcasses of dead giant squid to learn about the species.