This Galveston boyfriend wins the hero of the day! 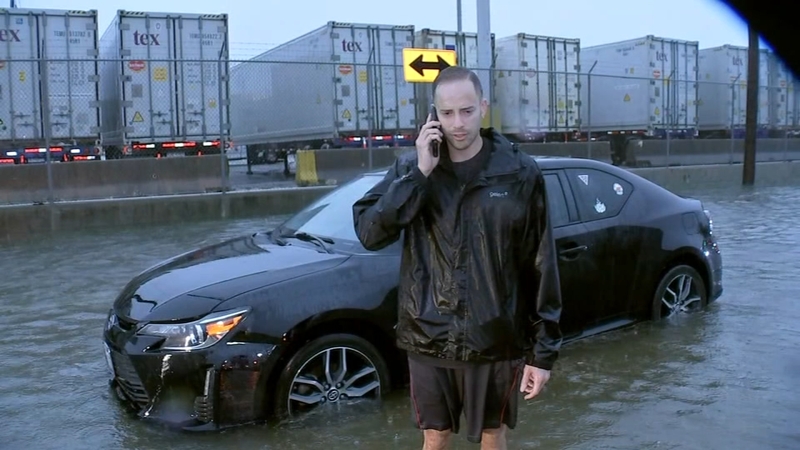 GALVESTON, Texas (KTRK) -- As heavy rains from Imelda drenched Galveston Island, there was one bright spot: a man who earned major points as his girlfriend's knight in shining armor.

ABC13 reporter Courtney Fischer caught up with John Adiletta, who waded through water up to his calves trying to get to his stranded girlfriend.

It turned out, a tow truck driver got to her first.

It all unfolded Wednesday morning when John, clad in flip-flops and shorts, received a phone call from his girlfriend saying she flooded her car.

ABC13 found him trudging through the water next to a black car on Harborside Drive.

When asked what he was doing, John said, "I'm looking for my girlfriend."

The wrecker driver swooped in seconds earlier. But like any prince charming, John took the news well.

He got in touch with his girlfriend again, who told him she was safe.

Relieved and still maintaining a positive attitude, he did reveal that letting off a bit of steam helped him keep a smile on his face, despite the flooding.

"Well, I did a lot of screaming in my car to get out all the anger before I saw my girlfriend because she needs me to smile.... because this is not a good day," John said.

John had a point: it has been a rough one.

Throughout the morning, streets were filled with water up over the curb, appearing only inches away from entering buildings in Galveston's historic Strand district.

John and his girlfriend live and work in Galveston.

"Our work told us to use discretion in coming, but they also said, 'We're open for business, so you're either working or putting in for paid time off,' and we're like, 'Well, we're not using vacation days to sit at home and do nothing,'" John explained.

Thankfully, it worked out for them.

For the single people hoping to find their own would-be hero, John is clearly taken.

But maybe he has a brother?

"I lost traction. It's basically topsy-turvy, so that's why I'm spinning," the Uber driver said.