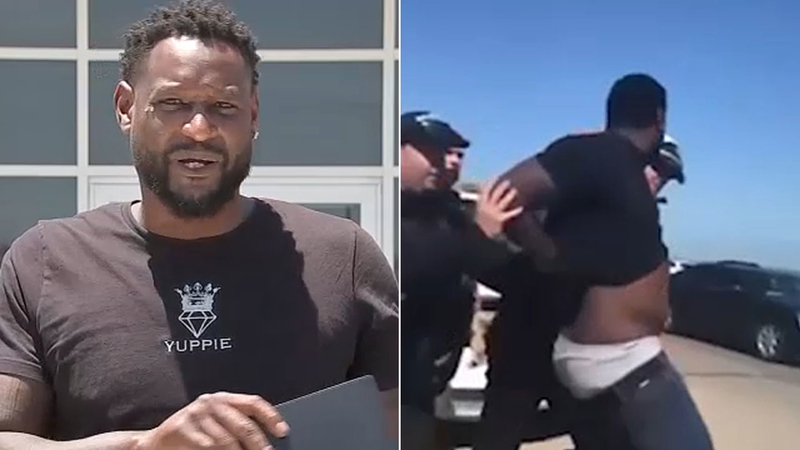 The arrest happened on April 24 during SLAB Weekend where thousands of people from around the region drive to the island to celebrate slab car culture, which is distinct to the city of Houston.

"They just wanted to show off their cars and enjoy the weekend on the beach," said Dr. Candice Matthews of the Texas Coalition of Black Democrats.

Matthews along with activist Quanelle X spoke up about what they see as an over-policing of all attendees of Slab Weekend, which they believe is motivated by the fact that the majority of attendees are Black.

"Why is it when they have big Mardi Gras events that are not Black oriented, or lots of Black participation, there's a difference in policing?" asked Quanelle X.

It happened last year when Corey Spiller showed up to the scene of his girlfriend's car accident.

Specifically, though, the group is upset about the treatment of Malone, who was pulled over for an expired tag, which he did not dispute.

"My tags were expired," said Malone, who did not take any questions from reporters on Wednesday. "I shouldn't have been here in the first place. I should have been home with my kids."

However, Matthews says Malone should have only received a ticket, and did not need to be arrested or had Tasers deployed.

"The gentleman was pulled from his car, thrown to the ground, Tased, while being held by four officers, one of which beat him in the back repeatedly," said Matthews.

In video released by the Texas Coalition of Black Democrats, you can see several officers placing their hands on Malone as they moved him toward the squad car to be placed under arrest. In another video, you can see an officer appearing to hit someone on the ground. Malone said that was him.

"They have a job to do," said Malone. "Galveston police are fine police because I've been pulled over by them before, but what was out there that weekend were goons. It was not the same police."

Galveston police said it's investigating the incident and would not comment specifically on the accusations by the activists.