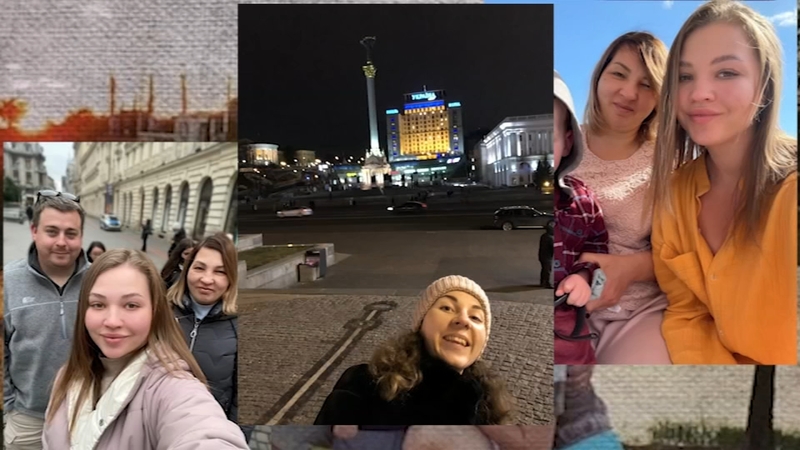 Galveston Co. family fights to get loved ones from Ukraine to US

LEAGUE CITY, Texas (KTRK) -- A powerful plea wasn't enough to help a Galveston County Marine get his family to the U.S. from Ukraine.

Now, instead of fleeing to the U.S., their loved ones face the cruel reality of returning to the warzone. William Weeks served in the Marines. He later met a Ukrainian woman, Aliana, got married, and they moved to League City. Now, Aliana is trying to get her mom and sister to the United States.

"I feel like I lost part of me because I was like, 'My family there, they have a war in the country,'" Aliana Weeks said. "They cannot come back right now."

Speaking from Europe and Galveston County, the Weeks shared struggles of getting loved ones from Ukraine.

"We had to wire money to some of their friends so that they could travel via vehicle to try and get out of the country," William Weeks recalled.

They met their loved ones in Romania days ago. Although they were happy to see them, Aliana's sister, Anna Savchuk, struggled with leaving loved ones behind.

"There are all my friends, all my family. There is my husband, and I need to leave my country, my home," Savchuk said.

After being together, they applied for a tourist visa.

"I thought there would be no problem," William Weeks said. "At least getting into the embassy and trying to speak on their behalf."
After days of waiting, they were denied. They were told they didn't have enough ties to return to Ukraine.

"I wrote my senators. I wrote my representatives," Weeks explained. "I heard nothing back. I've exhausted every resource I can to legally get them a visa to come to the United States."

Weeks plans to leave Friday. His in-laws will stay another week in Romania. After that, they'll return to Kyiv. A trip that brought the family together days ago now faces the reality they won't be leaving together.

"Our son, he just lost one of his grandparents this December and I just don't want him to lose another one," Aliana Weeks said.

If you're scratching your heads about why the family can't get a tourist visa, immigration experts say it's not so easy. They're good to try and get because they can be obtained quickly. But you must show ties to your home country, and plans to return. However, it may be harder to get during a war because the reality is you may not return.

There's always the refugee route. However, it means you have no plans to return. It can take months or years to obtain. You must also apply to move to other countries as well. When ABC13 asked the family why not just flee to another European country - they said they didn't want to be a burden.