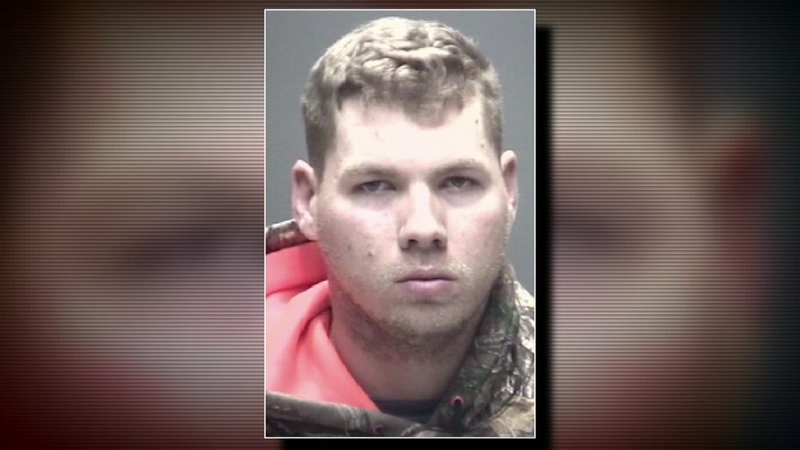 BACLIFF, Texas (KTRK) -- A man is under arrest after allegedly firing a shot and hitting a Galveston County Sheriff's vehicle in Bacliff.

According to the Galveston County Sheriff's Office, a dark colored Chevy pickup drove by and fired a shot in the deputy's direction at a Valero store on Grand Avenue and Highway 146 around 1:15 a.m. Friday.

The bullet hit the deputy's patrol vehicle. The deputy then chased after the truck.

The truck crashed a short time later along Bayshore Drive. The suspect, Charles Porras, then bailed out of the truck and ran.

"It was the loudest noise I ever heard in my life, I just thought I'd see a plane here or something," said Dennis Kary, whose front yard was mowed down by the truck. "He just came crashing through and landed right here," Kary pointed to his front porch.

As Porras tried to make a run for it, he allegedly left a small silver semi-automatic handgun on Kary's front yard.

But he didn't get far.

Moments later, he ended up in the front yard of another family. Robert Schnyder confronted Porras.

"I asked him if he was part of that crash, and he said 'can you call my wife, can you call my wife?' And I said, 'no I can't do that, you might want to go see those officers over there, to see if they can help you,'" said Schnyder.

Porras then tried to run down the street, while Schnyder's fiance called 911. Deputies caught up with him moments later.

Deputies say Porras admitted to owning the truck and the handgun. Porras is being held on a count of aggravated assault on a public servant. His bond was set at $150,000.

Investigators believe Porras was the only person involved.