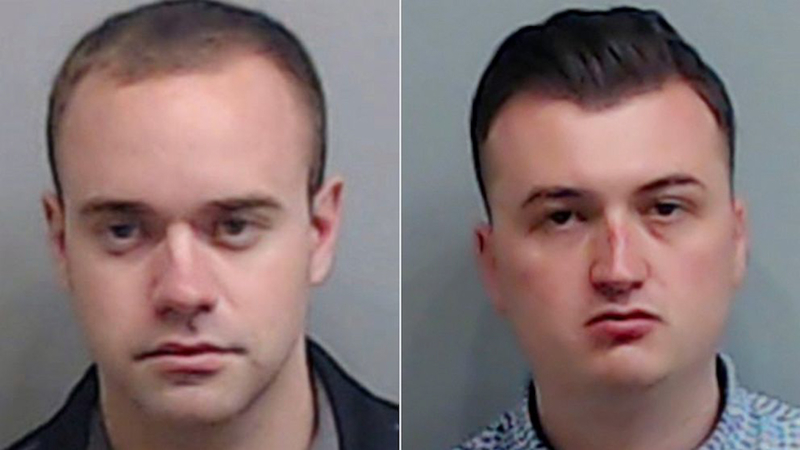 ATLANTA, Georgia -- Former Atlanta police officer Garrett Rolfe, accused of felony murder in the shooting of Rayshard Brooks, has turned himself in.

The officers were told to surrender by 6 p.m. Thursday.

Brosnan's bond was set, and he was released shortly after. Brosnan will not appear in court for a bond hearing, his attorney, Don Samuel, said.

Rolfe has been fired and is facing charges including felony murder and aggravated assault. If convicted of felony murder, Rolfe could face the death penalty, prosecutors said.

Brosnan is facing two charges of violations of oath and a charge of aggravated assault for allegedly standing on Brooks' shoulder after he was shot by Rolfe, Fulton County District Attorney Paul Howard Jr. said.

The deadly shooting unfolded on Friday in a Wendy's parking lot. Brooks, a 27-year-old black man, was running away when he was shot by Rolfe, and at that time, Brooks "did not pose an immediate threat of death or serious physical injury," Howard said Wednesday.

The police-involved shooting began when officers were called to the parking lot for reports of a man, later identified as Brooks, asleep in his car. Police gave Brooks a Breathalyzer test, which registered a blood-alcohol level of .108 percent, above the legal limit of .08 percent.

When officers tried to put him in handcuffs, Brooks struggled, wrestled with both officers on the ground and then grabbed an officer's stun gun.

Surveillance video showed Brooks running through the parking lot with the officers behind him. At one point, Brooks turned and allegedly shot the stun gun at Rolfe, who drew his weapon and opened fire.

Brooks died from two gunshots to his back, the medical examiner determined.

When the shot was fired, Rolfe made an "excited utterance," and said, "I got him," according to Howard.

Attorneys for the officers said Wednesday that Rolfe's actions were justified under the law.

"Brosnan never pulled out his gun," Samuel said in a statement Wednesday."He tried to pull out his taser when Mr. Brooks resisted arrest and fought with both of the officers. Devin was knocked to the ground and his head hit the pavement and he suffered a concussion."