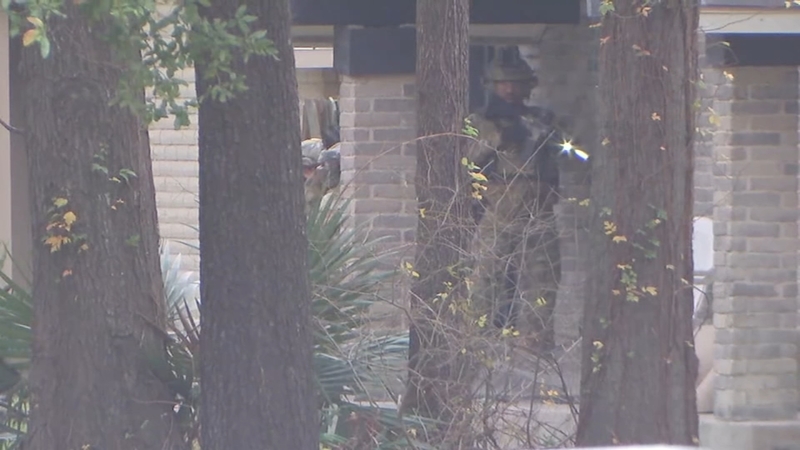 4 dead after attempts to get suspect to surrender in standoff

HARRIS COUNTY, Texas (KTRK) -- Four people are dead, including the suspected shooter, after a SWAT situation unfolded overnight in the North Shore area.

Authorities say Harris County precinct 3 deputies responded to a home in the 14300 block of Lourdes Drive after a woman called 911 around 3:15 a.m., saying she had been shot.

Harris County Sheriff Ed Gonzalez said that when authorities arrived, the suspect fired shots at deputies. No one was hurt.

Gonzalez said no deputies fired back, but the sheriff's office SWAT team was called.

A SWAT standoff at a North Shore area home didn't end peacefully. Here, Sheriff Ed Gonzalez explains how teams tried to get the suspect to surrender before sadly discovering four people were killed.

At one point, SWAT reached the man by phone. Authorities can be heard in a video trying to negotiate with the suspect.

Officials ended up using a robot to smash through the windows of the home. That's when they discovered the four people inside dead.

Gonzales said that the 49-year-old suspect, a second man, and two women all died. The suspect appears to have died of a self-inflicted gunshot wound.

Deputies believe one of the women was dating the suspect, and that two of the people killed were her adult children.

Gonzalez said it appears the shooting all occurred before authorities arrived, as no shots were heard once they were on scene.

🔉Sound on: HCSO on scene of a man barricaded inside a home on Lourdes Dr in the North Shore area. Pct 3 units were originally responding to a woman shot- when they got here, someone started shooting at them, no one hit. HCSO now trying to get suspect out. @abc13houston pic.twitter.com/hB7unJWCOr

Still out here in the North Shore area where a man barricaded himself inside a home on Lourdes.. this after HCSO says he shot at Pct. 3 deputies responding to a woman who was shot. Latest ->> https://t.co/MnJsPSaRoh pic.twitter.com/Bopre7V1ko