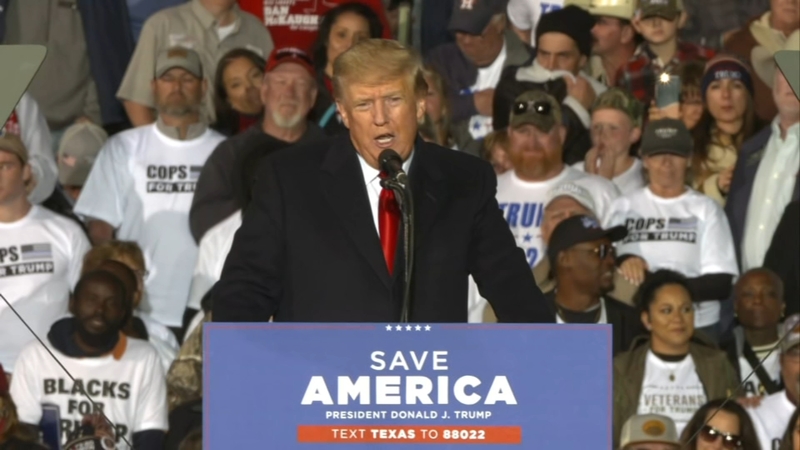 CONROE, Texas -- Former President Donald Trump is dangling the prospect of pardons for supporters who participated in the deadly Jan. 6 storming of the U.S. Capitol if he returns to the White House.

"If I run and if I win, we will treat those people from January 6th fairly," Trump said Saturday night during a rally in Conroe, Texas. "And if it requires pardons, we will give them pardons because they are being treated so unfairly."

The offer represents an attempt by Trump to further minimize the most significant attack on the seat of government since the War of 1812. Participants smashed through windows, assaulted police officers and sent lawmakers and congressional staff fleeing for their lives while trying to halt the peaceful transition of power and the certification of rival Joe Biden's victory.

More than 700 people have been arrested and charged with federal crimes in connection with the riot, marking the largest investigation in the Justice Department's history. The tally includes more than 150 people charged with assaulting police officers, more than 50 charged with conspiracy, and charges of seditious conspiracy against the founder and leader of the far-right Oath Keepers militia group, and 10 other members or associates.

More than 100 police officers were injured, some critically, after Trump supporters stormed the Capitol on Jan. 6, 2021, following a "Stop the Steal" rally by Trump near the White House in which he falsely claimed Biden had won election through massive voter fraud.

Trump has criticized the Democrat-led House for its ongoing investigation of the riot.

While his supporters overran the Capitol on Jan. 6, Trump ignored desperate pleas from allies to forcefully disavow the attack and has repeatedly praised those who participated in the protest.

Trump, who was impeached by the House for his role in inciting the insurrection but acquitted by the Senate, has been teasing a third run for the White House in 2024.
Report a correction or typo
Related topics:
politicsconroedonald trumprepublicansriotvotingtexasus capitolrally
Copyright © 2022 by The Associated Press. All Rights Reserved.
TOP STORIES
Death toll rises to 20, mostly children, in TX school shooting
Uvalde school shooting: What we know about 18 kids, teacher killed
How to talk to kids about Texas school shooting
New documents reveal possible motive in Vanessa Guillen's murder
Election 2022: Full results from Texas primary runoff elections
Weather Alert Day: Round of strong thunderstorms expected overnight
Texas leads nation in school shootings since 2013, data shows
Show More
Bodycam footage released of man shot by HPD officer in late April
A look at some of the deadliest US school shootings
Houston-area leaders react to Texas elementary school shooting
NOAA predicts above average hurricane season for 2022
Primary runoff sets up mid-term contests for AG and Lt. Gov. positions
More TOP STORIES News