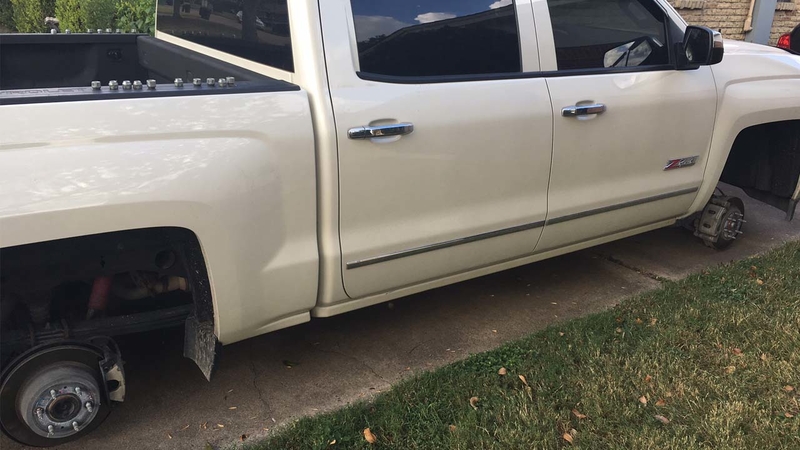 HOUSTON (KTRK) -- Police are looking into several thefts in the Forest Pines neighborhood that happened overnight.

At least three families woke up to their trucks sitting on cinder blocks with all four tires stolen. Two other families claim their SUVs were broken into.

Armando Leija's cameras captured video of the man neighbors believe is one of the thieves.

In the video, a man dressed in a black sweatshirt with black pants can be seen sneaking around the front of Leija's Escalade, kneeling down by a tire.

After working on one of Leija's wheels for a few minutes, the suspected thief seems to give up. But Leija said he did steal his wallet.

A couple streets over, James Ortiz thinks the man in Leija's video is the same person who stole all four tires off Ortiz's truck, leaving it sitting on a cinder block.

"It's probably not a good move to do it again because, now people know, they'll be ready," Ortiz said.

The stolen wheels set Ortiz back about $2,000. Not to mention, he literally can't go anywhere.

Neighbors are on high alert, many of them worried it will happen again.

"I have never been bothered since I lived here until now, so this has made me think about it a lot," Steve Powell said, who lives near one of the families that filed a police report.