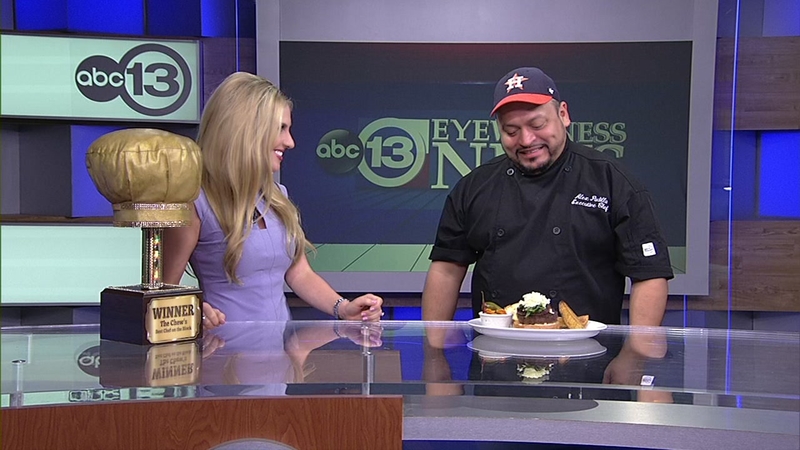 HOUSTON, Texas (KTRK) -- He won! Houston chef Alex Padilla was named the Best Chef on the Block on "The Chew."

Padilla, executive chef at Legacy Restaurants including The Original Ninfa's on Navigation and Antone's Famous Po' Boys, was named ABC13 and "The Chew's" Best Chef on the Block for Houston.

Local chefs were chosen on their culinary accomplishments as well as their community involvement.

Padilla competed against six other chefs from other cities for a chance to be named the Best Chef on the Block. After beating out two other contestants on Wednesday, he appeared on the ABC show Thursday at noon for the final cook-off and won.

After winning, Padilla was on "The Chew" again on Friday as he showed off his culinary flair and cooked next to the show's chefs.

-- Season meat with salt and pepper, cook on a flat grill at 375 degrees to preference (medium or medium rare) -- about 8 minutes on each side for perfect medium
-- Melt cheese on patty
-- Top with grilled onions and peppers (remove seeds from peppers)
-- Toast bun lightly on the grill

-- Finish with mustard, ketchup, chipotle mayonnaise or any other condiments

The story behind the dish:

"Ninfa's is obviously well-known for fajitas, ever since Mama Ninfa started serving them out of her garage in 1973. What I love about this dish is it takes that history that we have and puts it on a burger. Everybody loves burgers, and everybody loves fajitas, so it's like a grand slam.

"Six or seven years ago, I was flying from L.A. to Houston and I skipped lunch, and I was really hungry and I fell asleep. And in my dream, I was so hungry. I said, 'Well, I'm really hungry. I need something fast. I need a burger.' And when I woke up, I woke up with this idea of a fajita burger. That's how I came up with that idea. I don't know of any other Tex-Mex restaurants in Houston that do it."

A native of Honduras, Alex Padilla has been Executive Chef at The Original Ninfa's on Navigation since 2006. He learned how to cook from his mother, Maria, who was a line cook for Mama Ninfa Laurenzo at Ninfa's in the 1980s. Alex spent 18 years in fine dining in San Francisco under the tutelage of James Beard Award-winning chef Nancy Oakes at her famed restaurants L'Avenue and Boulevard prior to coming home to helm the kitchen at The Original Ninfa's. He is an avid Houston Astros fan and enjoys fishing, reading and spending time with his three young children.
Related topics:
food & drinkhoustonthe chewabccookingcooking chefrestaurant
Copyright © 2021 KTRK-TV. All Rights Reserved.
TOP STORIES
Fiancée of injured Pct. 4 deputy shares touching message
3 Harris Co. deputies shot outside N. Houston nightclub identified
Man on the run after shooting ex-girlfriend's new boyfriend, Sgt. says
Bullets aimed at NE Houston home strike woman, HPD Sgt. says
Man charged after crash kills 2 in Crosby, authorities say
How well do Astros and Red Sox fans know each other?
Woman shot to death in bank parking lot in SE Houston, HPD says
Show More
54-year-old Houston woman missing for over a week, police say
Sluggish starts have Texans and Colts looking to change course
Bill Clinton released from UCI Medical Center after blood infection
20-year-old shot and killed by gunman after minor crash, FBCSO says
Evidence of water vapor found on 1 of Jupiter moons: NASA
More TOP STORIES News