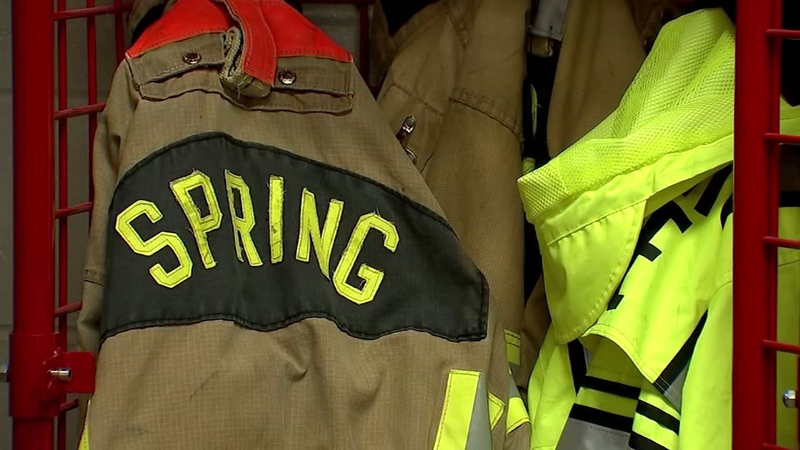 SPRING, Texas (KTRK) -- Firefighters are the brave men and women who run towards the fire to help keep us safe. But when the smoke clears, who protects them?

Firefighters in Spring are not only fighting fires together, but they're also fighting cancer together.

Matt Corso said he dreamed of being a firefighter since he was a teen.

"I can't imagine doing anything else," he said.

His dream came true in 2006, landing at Fire Station 70. Matt also got a family, a wife and two kids.

"They think it's cool. They love climbing on the trucks and coming to see me at work," Corso said. "They don't see the bad side of it."

But when the Spring Fire Department ordered mandatory wellness checks and life body scans for all of its employees in Nov. 2016, Corso learned he had stage 2 testicular cancer.

"I was a healthy 33-year-old, never had any medical problems when I went in for my physical, and within 20 minutes of being on the table, she thought she found an abdominal aortic aneurysm, which was a mass in my abdomen," Corso said.

After years of running into burning buildings and being exposed to dangerous toxins, Corso wondered if his job had jeopardized his health.

"My wife thought she was going to be a widow and I thought she was too," Corso said, in tears. "The different colors of smoke, if you think about that, none of it's good."

The smoke is now more dangerous than ever. It's causing an alarming rise in cancer among American firefighters. A report from the International Association of Firefighters showed elevated cancer rates in firefighters in major cities, like Los Angeles, Chicago, San Francisco, Seattle and Houston.

"It burns hotter and it burns faster and it burns darker, so it releases a lot more carcinogens," deputy chief Joel Crenshaw said. "As I'm getting older in this profession, a lot more of my colleagues that are the same age as I am, they have all been affected by the cancer."

In addition to the body scans, a new protocol for Spring Fire Department is also in place. Each firefighter has two sets of gear.

"We decontaminate each other as we come out at the scene, and then after the fire's over, we bag our gear so the apparatus and all the carcinogens is releasing, and we'll get back to the station and will wash the gear," said firefighter Michael Manshack.

After throwing the uniforms in a high tech washer, the firefighters go into a special decontamination unit, like a sauna.

"We come here and actually get our workout gear, come up here and put our workout stuff on, get the sauna ready," Manshack added.

"It doesn't raise your core temperature," added another firefighter.

It gets up to 104 degrees in the unit, but they keep pedaling, knowing it's possibly saving their lives. You can literally see all the black stuff dripping off their bodies.

"I feel really blessed with it, I mean it, they could invest their efforts into something else, but they invested in us specifically," Manshack said.

It's an investment Corso and his family are especially thankful for.

He did several rounds of chemo and was out of work for months, but doctors just gave the all clear. Now he's back at work.

"It's nothing for us to go help a stranger, but what Spring is doing is helping family. They would've spent more money to bury me than they did to save me," Corso said.