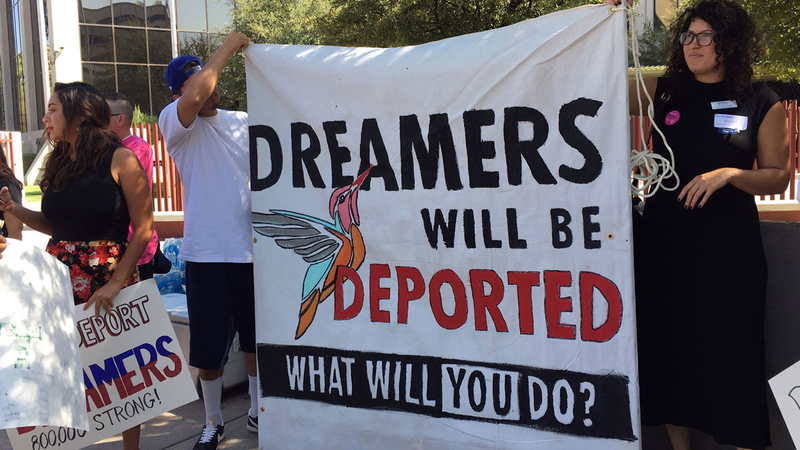 WASHINGTON -- President Donald Trump will phase out a program that has protected hundreds of thousands of young immigrants brought into the country illegally as children and call for Congress to find a legislative solution to protect the immigrants, sometimes known as "dreamers."

That's according to two people who were briefed on the plan set to be announced later Tuesday. They spoke on condition of anonymity to discuss the plans before the announcement.

Trump suggested in an earlier tweet that it would be up to Congress to ultimately decide the fate of those covered by President Barack Obama's Deferred Action for Childhood Arrivals, or DACA program, which has provided nearly 800,000 young immigrants a reprieve from deportation and the ability to work legally in the U.S.

He tweeted: "Congress, get ready to do your job - DACA!"

"Make no mistake, we are going to put the interest of AMERICAN CITIZENS FIRST!" Trump added in a second, retweeted message. "The forgotten men & women will no longer be forgotten."

Trump has no announcement on his Tuesday schedule, but Attorney General Jeff Sessions, a harsh opponent of the program, scheduled a press briefing on the topic later Tuesday. It's the same day as a deadline set by a group of Republican state officials who said they would challenge DACA in court unless the Trump administration rescinded the program.

After Harvey, Diana Platas says she is concerned about news DACA was rescinded by the Trump administration.

Many believe the program would not hold up in court.

Trump's expected plan to take a hard line on young immigrants unless Congress intervenes threatens to emphasize deep divisions among Republicans who have long struggled with the issue, with one conservative warning of a potential "civil war" within the party. Congressional Republicans have a long history of being unable to act on immigration because of those divisions.

Rep. Ileana Ros-Lehtinen, R-Fla., tweeted: "After teasing #Dreamers for months with talk of his 'great heart,' @POTUS slams door on them. Some 'heart'.."

Trump's decision comes after a long and notably public deliberation. Despite campaigning as an immigration hard-liner, he has said he is sympathetic to the plight of the immigrants who came to the U.S. illegally as children and in some cases have no memories of the countries they were born in.

But his approach - essentially kicking the can down the road and letting Congress deal with it- is fraught with uncertainty and political perils that amount, according to one vocal opponent, to "Republican suicide."

Still other Republicans say they are ready to take the issue on.

"If President Trump makes this decision, we will work to find a legislative solution to their dilemma," said Republican Sen. Lindsay Graham.

The Obama administration created the DACA program in 2012 as a stopgap as it pushed unsuccessfully for a broader immigration overhaul in Congress. Many Republicans say they opposed the program on the grounds that it was executive overreach.

House Speaker Paul Ryan and a handful of other Republicans urged Trump last week to hold off on scrapping DACA to give lawmakers time to come up with a legislative fix.

But Congress has repeatedly tried - and failed - to come together on immigration overhaul legislation, and it remains uncertain whether the House would succeed in passing anything on the divisive topic.

One bill addressing the issue that has received the most attention, introduced by Sens. Graham, R-S.C., and Dick Durbin, D-Ill., would grant permanent legal status to more than 1 million young people who arrived in the United States before they turned 18, passed security checks and met other criteria, including enrolling in college, joining the military or finding jobs.

It's unclear, however, whether the president would throw his support behind that or any other existing legislation. He could encourage the writing of a new bill - tied, perhaps, to funding for his promised border wall or other concessions like a reduction in legal immigration levels.

But it's unclear how much political capital the president would want to put on the line given his base's strong opposition to illegal immigration, his campaign rhetoric blasting DACA as illegal "amnesty" and his reluctance to campaign hard for other priorities, like health care overhaul.

Graham said in a statement Monday that he would support the president if he decided ultimately to go through with the plan as outlined.

"I have always believed DACA was a presidential overreach. However, I equally understand the plight of the Dream Act kids who - for all practical purposes - know no country other than America," Graham said in a statement.

Sen. James Lankford, R-Okla., agreed, saying that it should be up to Congress, not the White House, to set immigration policy.

"We must confront the nation's out-of-date immigration policy and finally resolve the issues of strong border enforcement and merit immigration," he said. "It is right for there to be consequences for those who intentionally entered this country illegally. However, we as Americans do not hold children legally accountable for the actions of their parents."

But Rep. Steve King, an Iowa Republican who believes that DACA is unconstitutional, warned that pushing the decision to Congress would be a big mistake.

"That would cause a great big civil war among the Republicans," he said last week. "We've got enough of never-Trumpers in Congress that are undermining the president's agenda."