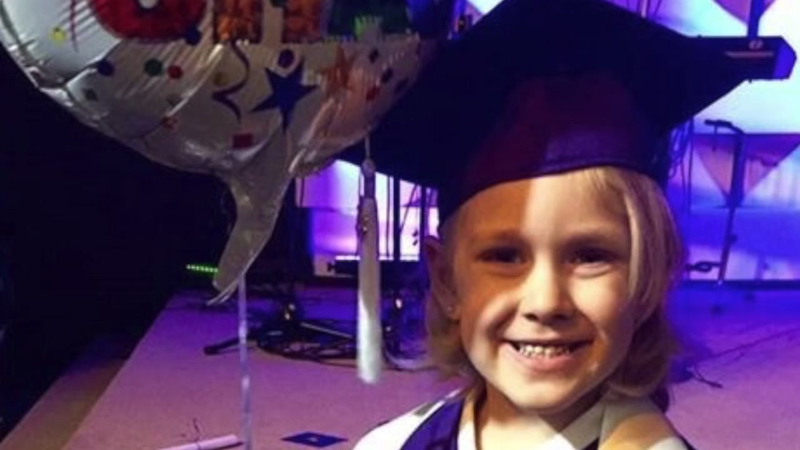 PEARLAND, TX (KTRK) -- Kimberly Shappley is as conservative and Christian as they come.

It was her child who, at just three years of age, would challenge her faith and rock her to the core.

For Shappley and her family, it all began with a hair bow.

"I want a bow like Daisy," her then-three-year-old son Joseph Paul begged of her. Shappley knew the big red bow, ponytails and princess dresses were things almost every little girl wished for. However, these weren't for a daughter -- Shappley reminded herself these were the requests of her son.

"Please mommy," Joseph Paul would plead with her.

His desire to dress in little girl's clothes is a secret Shappley has kept from the outside world since Joseph was just a toddler. As an infant, she put him in blue clothes. As a toddler, she made him do what shes says is 'typical boy stuff,' like fishing, playing football with his siblings and throwing little boy's birthday parties.

"We tried to make this kid be a boy," said Shappley. Still, Joseph kept seeking out what the girls had and, by the age of three, he was telling everyone he was a girl.

A devout Christian, Shappley prayed while Joseph made shirts into skirts and begged to wear girls underwear -- and asked his family to call him by the name of "Kai."
EMBED More News Videos

Pearland mother uses underground social media group to find the strength to come out of the shadows and talk about embracing her transgender child.

"This hasn't happened overnight for us. I am a Christian and I love the Lord," Shappley said as she struggled with her son's requests.

The gravity of her son's pleas became almost too much to bear when she heard Kai praying to die.

"I overheard Kai praying and asking the Lord to please take Joseph home to be with Jesus and I realized Kai's begging the Lord to let her die," Shappley said through tears.

As a first step down the path to understanding Kai's situation, Shappley bought girls underwear for Kai, though it took her three trips to the store to finally purchase them.

"When Kai came home that day and opened the drawer and saw princess panties, she fell down on the floor with the panties, crying and thanking me that this was the best day ever," Shappley said.

Shappley sought out more help, turning to pastors and her faith. Her hope was that her young boy would act like one.

"So Christians are not gay, OK, that's the mindset that I had."

"Christians are not going to have a transgender child, because as a Christian, that goes against everything that we read in scripture," she said.

Feeling alone and isolated, Shappley dug into social media for help, finding a secret underground Facebook network of more than 2,000 other Christian mothers with transgender children. Shappley says she found support in the stories of other mothers who had faced criticism, some who had even been threatened by those who had vowed to take their children away or kidnap them.

"We knew that, at some point, if someone found out that our child was transgender, that you could put our safety at risk," Shappley said.

Despite all the risks, acceptance has helped Shappley and Kai. She says her daughter is now thriving.

As for Shappley herself, the Facebook group for Christian parents of transgender youth was just the beginning of her journey to understanding and accepting Kai.

Now five years old, Kai will soon enter the public school system in Pearland at the same time schools throughout the country work to meet the demands of an Obama administration directive that says transgender students are to be treated no differently than any other students.

"Now that my daughter is entering public school, the superintendent of our school district has made it where we have to come out," Shappley said of her reservations about the upcoming school year. "We have to take a stand."

The reason for taking that stand? Shappley says the Pearland Independent School District will not allow Kai to use the girl's restroom.

Now, Shappley has teamed up with the non-profit organization Equality Texas, bringing their fight to the Texas Capitol.

"It wasn't about water fountains in 1960 and it's not about toilets today," she said.

Call it maternal instinct, Shappley says she is only trying to protect the development of her daughter.

"She's not a threat to your children, but when you teach your children that my kid is a monster, then your kids are threat to mine, and that's not fair," she said.

In a statement provided to Shappley, a spokesperson for Pearland ISD wrote:

"Children whose parents declare them transgender must go to the bathroom for the sex indicated on their birth certificate. Such student(s) have also been allowed to use a private bathroom (such as in the nurse's station) if they are so inclined."

Despite the Obama administration's directive to all school districts that they cannot treat transgender students differently, Texas, along with a dozen other states, are filing a suit to block the mandate.

To learn more about transgender children and what to look for in your child, watch the video below.

Experts weigh in on transgender children