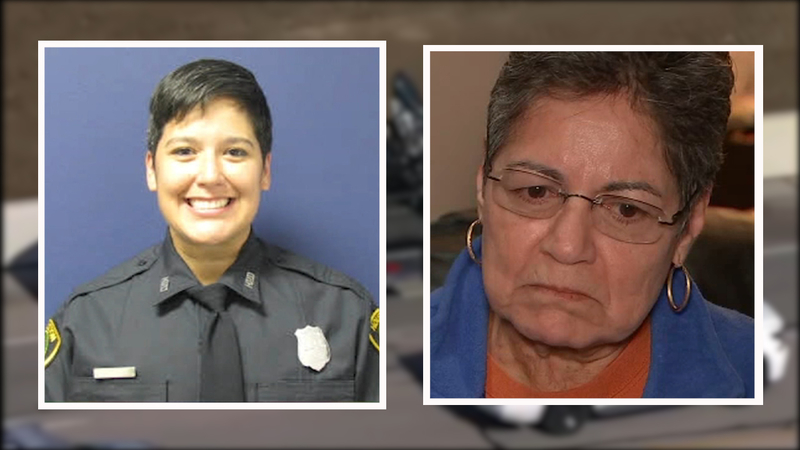 SEALY, Texas (KTRK) -- The family of a Houston police officer who died Thursday after a wrong-way crash is now trying to cope with confusion over the circumstances of her death as they also process their grief.

Officer Gizelle Solorio, 32, was off duty, traveling the wrong way in the westbound lanes of I-10 near Sealy in her Toyota Tacoma when she crashed into a big rig, according to DPS.

She died at the scene, and no one else was hurt.

DPS says the off-duty officer was driving the wrong way on I-10 when she crashed with a semi.

Her mother, Irma Solorio, said Gizelle was always a caretaker, looking out for those around her and helping care for her brother who has special needs. Becoming an officer seemed like a natural fit.

"She was like a mama out there. Everyone in the world were her babies," Irma said.

With heavy hearts, we learned one of our own died in a crash on I-10 West near Sealy at 6:30 a.m. today. Officer Gizelle Solorio was off duty at the time. We ask for your prayers for Gizelle & her family. pic.twitter.com/NuS7CqeNWv

She added the circumstances of Gizelle's death are confusing to her, and she's searching for answers.

DPS said there were no obvious signs of intoxication. Toxicology tests are underway.

This is just the latest tragedy for the family. Gizelle's grandmother and father both died months apart in 2017.

Before she died, Gizelle promised to look after her brother in the event that Irma passes on..

"(Gizelle) was the light of the world and it's gotten dark," she said.

Follow Steven Romo on Facebook and Twitter.
Report a correction or typo
Related topics:
sealycar crashcar accidentwrong wayofficer killed
Copyright © 2021 KTRK-TV. All Rights Reserved.
TOP STORIES
Boston-bound jet crashes on takeoff west of Houston with 21 on board
Houston executive 1 of 21 on board jet when it crashed in field
How residents in this Harris County neighborhood became numb to crime
Loved ones remember mom of 3 killed during home invasion
Alvin Community College offers way to tap into oil and gas
Friendswood gas fire put out after more than 5 hours since eruption
Aviation weighs in on what might have gone wrong in plane crash
Show More
Jan. 6 panel votes to hold Steve Bannon in contempt
Big warm up ahead but another cool front in the forecast
Astros vs. Red Sox: Houston ties the series after 9-2 win over Boston
Unsolved: A Life Never Lived
Alvin Community College gives inmates way to earn a second chance
More TOP STORIES News