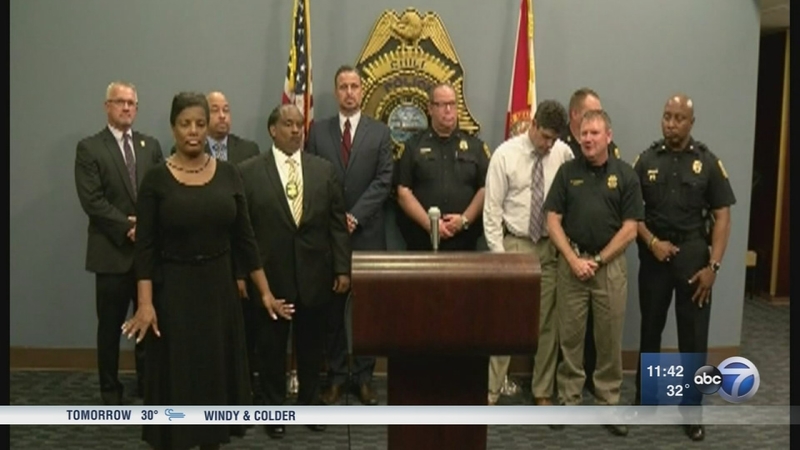 TAMPA, Florida -- Hearing-impaired people tuning in to a news conference about the arrest of a suspected serial killer got a message of gibberish from an American Sign Language interpreter.

As Tampa police Chief Brian Dugan announced the arrest of Howell Donaldson Wednesday night, interpreter Derlyn Roberts was there beside him, making signs that made no sense.

"She sat up there and waved her arms like she was singing Jingle Bells," Rachell Settambrino, who is deaf and teaches American Sign Language at the University of South Florida, told the Tampa Bay Times through an interpreter.

In fact, the chief was providing a timeline of the four shootings, and describing how his agency had received some 5,000 tips before arresting the 24-year-old suspect.

"I was disappointed, confused, upset and really want to know why the city of Tampa's chief of police, who is responsible for my safety ... did not check her out," Settambrino said.

Tampa Police Department spokesman Steve Hegarty said Monday that Roberts just showed up and told him she was there to provide the sign language interpretation at the Nov. 28 news conference. He assumed that someone else at the department called the service it uses for interpreters.

"I allowed her to do it. I didn't ask enough questions," Hegarty said. "

How she knew about the press conference and why she volunteered to do sign language interpretation is still a mystery Hegarty wants to solve.

"I don't know what motivates her, but she hasn't returned my calls," he said. "I would like to know both professionally, and also personally, how did it occur to you to come down to do that?"

At the next day's follow-up news conference, a different interpreter, Ben Zapata, was beside the chief.

Hegarty said she won't face any charges. A person matching Roberts' name and age has an extensive criminal record that includes convictions for fraud over $50,000 and fraudulent use of personal information, but Hegarty couldn't confirm they are the same person. A message left at a number listed for Roberts wasn't immediately returned.

It is the most recent example of an apparently unqualified signer appearing at news conferences. In September, as Hurricane Irma approached Florida and officials announced a mandatory evacuation, an interpreter in nearby Manatee County began signing words like "pizza," ''monster" and "bear," along with other gibberish.

Manatee County officials later said they were in a pinch and called on a county employee who had an understanding of sign language because he communicates with his deaf brother. However, it quickly became apparent he was in over his head. The deaf community demanded an apology and the video of the news conference went viral.

In 2013 in South Africa, a fake interpreter appeared beside former President Barack Obama and other world leaders during a memorial service for Nelson Mandela, apparently signing gibberish. He later said he is schizophrenic and had seen angels descending in the stadium where the event took place.

Settambrino said Florida, unlike some other states, does not require ASL interpreters to be certified through the Registry of Interpreters for the Deaf, a national nonprofit that "seeks to uphold standards, ethics, and professionalism" for the field, according to its website.

Florida says only that ASL interpreters have to be "qualified," Settambrino said. "But what is that definition of qualified?"