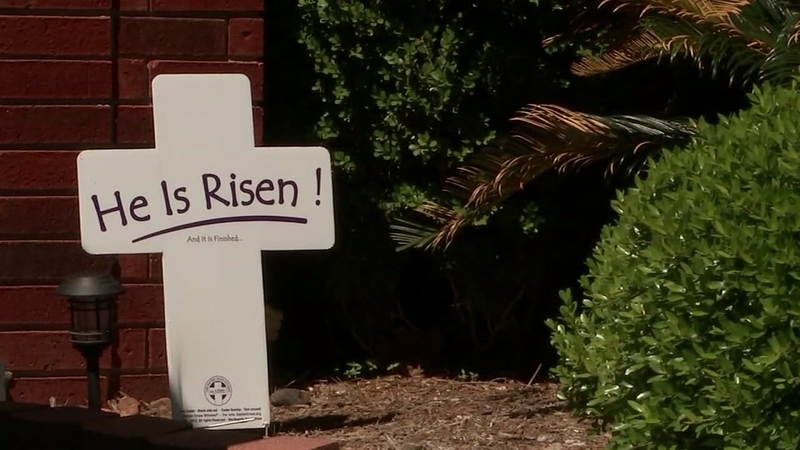 HOUSTON, Texas (KTRK) -- Faith is important to Edward and Mona Hartnett. Edward is a disabled veteran and a former Green Beret.

"That's what gets us through all the times of need, is that reliance on God," Edward Hartnett Jr. said.

So, this Easter just like every Easter since 2013, the couple placed a sign in the shape of a cross with the words "He is Risen!" in their front yard.

"On Easter Sunday, when he conquered death and he arose. That's what the sign says, he has risen," said Hartnett.

They leave it up for 40 days, which symbolizes the time Christ is believed to have walked the earth again.

A letter from Action Property Management, the company hired by the HOA, says their property is not in compliance with deed restrictions and they need to remove the sign from their property.

"They're calling it a sign and it's not. It's a religious symbol," said Hartnett.

The HOA says they are not notified by Action Property Management Company of violations until a second or third notice.

The Hartnetts say this is their first this year.

"I understand Dr. Ed Hartnett received a letter from our management company.

Typically on first letters the board of directors receive a report and we talk.

Apparently, Dr. Hartnett and his wife received a letter about the sign that is a cross with the words "He is Risen" on it, that he placed in his front yard near his tree. We are surprised that Dr. Hartnett, who is very fond of writing to the board and management company, did not write to us ask for more information about the alleged violation in the letter.

First letters are just that a chance for a conversation. There are no fines, penalties, legal action or anything. A 30 day period is allowed for that conversation to take place.

There is even a board meeting this evening at 7 p.m. in which he could have attended and addressed it with us. I know he knows of the meetings as he has commented to me when dates have changed in the past.

Tonight's meeting is posted on our community bulletin board, e-mail blasted to those who have provided e-mail addresses and was posted on the community Facebook page with the full agenda.

We will have to review the details of this infraction now that it has gotten such notoriety without us even having knowledge until a couple of hours ago of its existence.

It is also interesting since he brought up this [very] issue many years ago when we talked about how it violated a no signs policy in our neighborhood, and we informed him that the cross alone, with no writing, was perfectly acceptable."

In 2013 the couple say they fought a notice on the same thing.

This veteran says he's fought before and he'll fight for this.