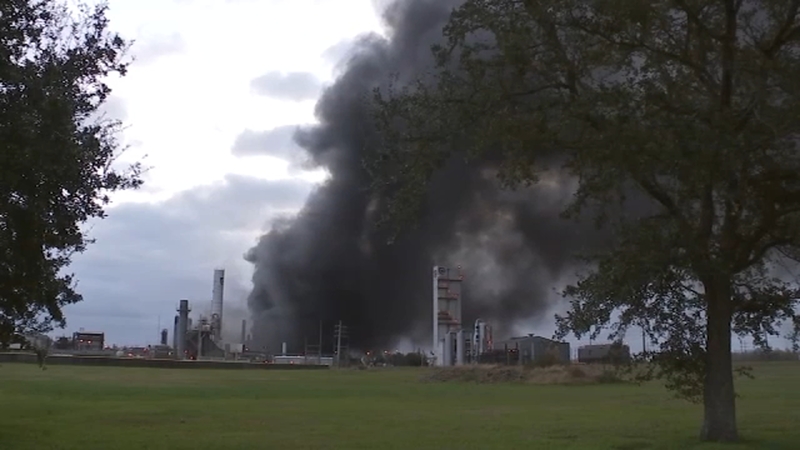 PORT NECHES, Texas (KTRK) -- Many families aren't able to spend Thanksgiving in their homes because of the explosion at the TPC plant in Port Neches, near Beaumont.

A mandatory 4-mile evacuation is still in effect as the fire burns.

The areas within that radius include the cities of Port Neches, Groves, Nederland and the northern part of Port Arthur bounded by: the intersection of Sunken Court at Twin City Highway to St. Catherine's Church, on Woodrow Blvd., then to the Port Arthur Civic Center and including the areas of Beauxart Gardens and Central Gardens.

Some families stayed the night at a Red Cross shelter in Beaumont.

Surveillance video showed the initial blast around 1 a.m. Wednesday from Avenue Coffee and Cafe. In the video, the blast shakes the building, then blows the doors open.

The cafe spent hours cleaning up before employees evacuated. They're closed until further notice.

As for air monitoring, officials say all levels are within federal and state guidelines, and there is no danger to the public so far.

TPC says it has set up 20 air monitoring stations and will continue to monitor around the clock.

“Thank you TPC” spray painted on board nailed to window frame. Windows clearly blown out during yesterday’s explosion.

A 10 p.m. to 6 a.m. curfew went into effect Wednesday night and is expected to continue until further notice.

Port Neches Chief of Police Paul Lemoine explained on Facebook that residents aren't completely forbidden from their homes during the day despite the curfew and evacuation order.

"Even though this is a mandatory evacuation, we are not using these resources to prevent the entry of citizens back into the City," Lemoine said. "This will only be enforced during the 10 p.m. to 6 a.m. curfew period."

"I can feel your frustration and sorry for any plans that might have been interrupted, but I want to emphasize that the safety of our community is always going to be our top concern," said Jefferson County Judge Jeff Branick.

Residents who live within a 4 mile radius of the TPC facility in Port Neches are making the best of their situation this Thanksgiving.

Jefferson County officials said the fire could take days to put out.

RELATED: What's burning in the refinery explosion in Port Neches?

Windows were shattered and a number of structures were damaged from the initial blast, according to posts on social media.
RELATED: Impact and thunderous sound of Texas explosion caught on camera
EMBED More News Videos