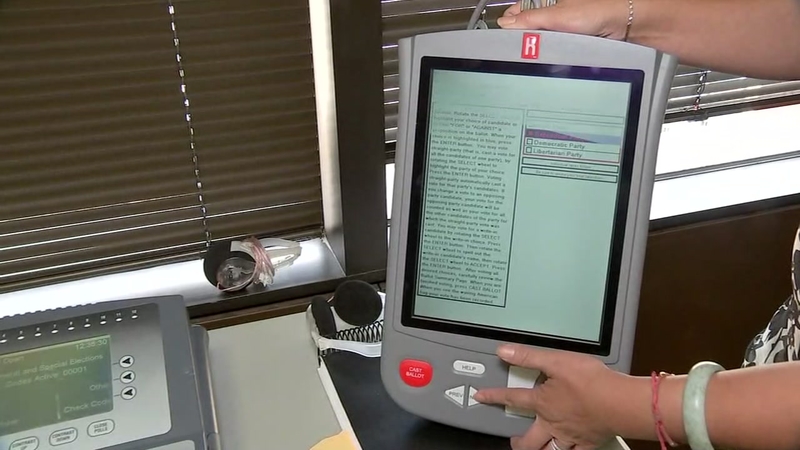 HOUSTON, Texas (KTRK) -- There is increasing anxiety over whether the popular eSlate voting machines prevalent across Texas counties are reliable.

As first reported by Eyewitness News in October, numerous voters have been complaining that when voting straight ticket, the machines would switch the senate choice to the opposing party.

It almost happened to Emily James, a freelance editor who lives in the Woodlands and votes in Montgomery County.

"I hit the next button," she recounts after hitting a straight ticket option. "But instead of going to the next screen, it was on the senatorial box, and it had deselected the candidate, and I had to re-select it."

James says she was able to correct her ballot in time, but worries about other voters.

A voting machine sits inside the Fort Bend County Election office on Oct. 25, 2018.

Harris County Clerk Stan Stanart and the Texas secretary of state insist it is user error.

"The machines do not have glitches," said Stanart, who insists the problems are caused by voters pressing two buttons at once. "They're doing exactly what you tell them to do."

But James points out, even if the machines don't have glitches, the simple fact that it is so prone to human error, means it's time for a different voting system.

"If I see a repeat pattern of the same errors happening over and over, I say that's not the consumer's fault, that's your fault, you need to fix that."

Hart Intercivic, the maker of the eSlate machines, says the technology is very reliable. It debuted in 2002, and is currently in use in dozens of Texas counties.

However, the technology is considered old, and Hart Intercivic no longer makes the eSlate machines.

For the past few years, the company has been pushing its clients to switch to Verity, a new type of voting system that features a paper ballot with digital scanning technology.

Harris County though, is in no hurry to adopt Verity. It would cost the county tens of millions of dollars.

At this point, the one piece of advice all sides agree on is that as a voter, you need to check, and double check your selections. The machines can be sensitive. Whether or not you believe there is a glitch or human error, make sure your selections are on the screen before you push the Cast Ballot button.