"As many of you know, Kanye has bi-polar disorder," a statement from the 39-year-old reality star begins. "Anyone who has this or has a loved one in their life who does, knows how incredibly complicated and painful it is to understand." 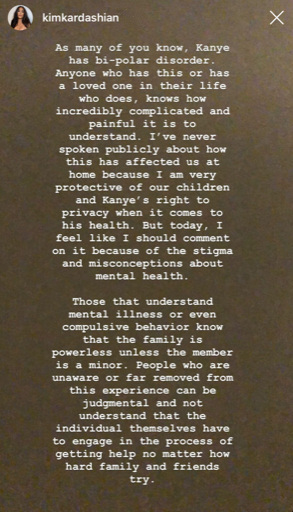 "I've never spoken publicly about how this has affected us at home because I'm very protective of our children and Kanye's right to privacy when it comes to his health," the aspiring lawyer continued. "But today, I feel like I should comment on it because of the stigma and misconceptions about mental health."

West, 43, first openly discussed his bipolar diagnosis on a 2019 episode of "My Next Guest Needs No Introduction with David Letterman." The rapper had previously been open about mental health struggles in his music, notably writing "I hate being Bi-Polar it's awesome" on the cover of his 2018 album, "Ye."

Over the weekend, West, who announced a desire to run for president last month, left fans concerned following an emotional appearance at a rally in South Carolina. His social media activity in the days since has also sparked worry.

Kardashian noted that in cases like these, "family is powerless unless the member is a minor." She added that no matter how hard family and friends try to help, people experiencing mental health struggles must "engage in the process of getting help" themselves.

"I understand Kanye is subject to criticism because he is a public figure and his actions at times can cause strong opinions and emotions," she wrote, calling her husband a "brilliant but complicated person." She said he has the "pressures of being an artist and a black man," on top of the loss of his mother in 2007. 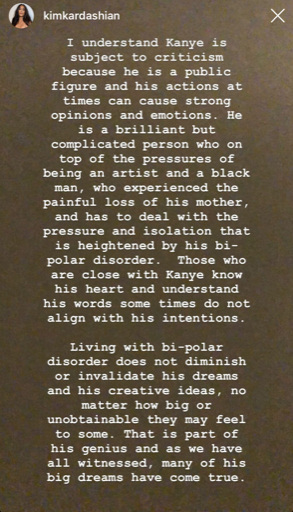 "Those who are close with Kanye know his heart and understand his words some times [sic] do not align with his intentions," Kardashian continued.

"Living with bi-polar disorder does not diminish or invalidate his dreams and his creative ideas, no matter how big or unobtainable they may feel to some," she added. "That is part of his genius and as we have all witnessed, many of his big dreams have come true."

Kardashian ended her statement by thanking those who have "expressed concern for Kanye's well being" and with an impassioned plea. 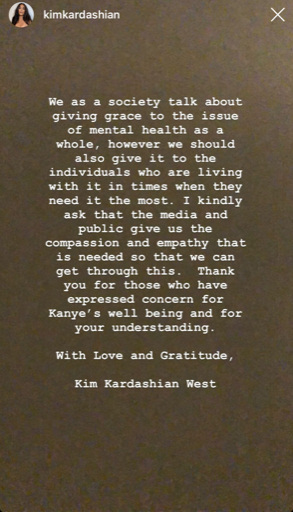 "We as a society talk about giving grace to the issue of mental health as a whole, however we should also give it to the individuals who are living with it in times when they need it the most," she concluded. "I kindly ask that the media and public give us the compassion and empathy that is needed so that we can get through this."

What to know about bipolar disorder

West is one of several celebrities who have opened up about their own battles with bipolar disorder in recent years.

Mariah Carey revealed publicly in 2018 that she had been diagnosed with bipolar II disorder years earlier, in 2001. More recently, fellow singers Bebe Rexha and Selena Gomez have spoken publicly about living with bipolar disorder.

Bipolar disorder is a lifelong illness defined as a "mental disorder that causes unusual shifts in mood, energy, activity levels, concentration, and the ability to carry out day-to-day tasks," according to the National Institute of Mental Health (NIMH).

All three types involve changes in mood and energy levels that can range from feeling "up" with symptoms such as restless thoughts and irritability to feeling very "down" and sad.

Manic episodes are associated with an increased activity level, while depressive episodes are the opposite, characterized by a low energy level, Dr. Jennifer Ashton, ABC News' chief medical correspondent, explained on "GMA" in 2018, at the time Carey revealed her bipolar diagnosis.

Bipolar I disorder is defined by "manic episodes that last at least seven days, or by manic symptoms that are so severe that the person needs immediate hospital care," according to the NIMH.

Bipolar II disorder also includes a pattern of mood episodes, but not "the full-blown manic episodes that are typical of Bipolar I Disorder," according to the NIMH.

People with cyclothymic disorder suffer from periods of hypomanic symptoms and depressive symptoms that last for at least two years but do not "meet the diagnostic requirements for a hypomanic episode and a depressive episode," according to the NIMH.

"Long-term, continuous treatment" can help people with bipolar disorder manage their symptoms, according to the NIMH.

"Episodes of mania and depression typically come back over time," the agency writes on its website. "Between episodes, many people with bipolar disorder are free of mood changes, but some people may have lingering symptoms."

"Being the loved one of a person with a mental illness can be extremely challenging. On top of dealing with a complex health condition, they often face judgement, shame and discrimination," NAMI said in a statement to "GMA."

"We commend Kim Kardashian for her openness about the complexity and difficulty of her position and of the many, many more like her," the organization continued. "We at NAMI support her during this trying time and encourage those in her and her family's situation to seek support for themselves and their loved ones. That can include programs like the evidence-based NAMI Family-to-Family course. You are not alone."