How this fan from Montgomery Co. became a big Star Wars winner 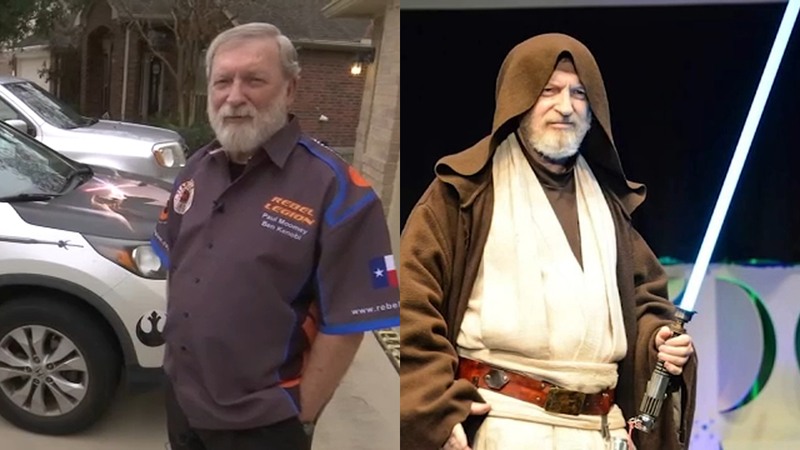 MONTGOMERY COUNTY, Texas (KTRK) -- Take one look at Star Wars fan Paul Moomey, and your judgement of his facial features will be spot on.

Moomey, 72, of Montgomery County, took advantage of his resemblance of a major character in the Star Wars universe to great reward.

Moomey cosplayed as Jedi Master Obi-Wan Kenobi for a contest he won.

The reward was as big as the Death Star: an invitation to the Hollywood premiere of "The Rise of Skywalker."

Of course, Moomey spared no expense in time and money winning the contest. He said it took more than a year to look for the right material, and it cost him about $2,000.

"They only wanted one Obi-Wan Kenobi," Moomey said, admitting he didn't feel he would win. "I went through the roof when I got the email."

Moomey's passion of Star Wars began in 1977 when the first film, "A New Hope," was released.

Moomey is part of the Rebel Legion and 501st Legion. The organizations help charities around the world, including Make-A-Wish.

Of the newest flick, Moomey said he was impressed.

"Personally, I thought the movie was fantastic. There is a lot going on. It's fast paced. You're going to laugh. It does answer a lot of questions. I'm not going to say anything. I thought it was absolutely wonderful," Moomey glowed.

His passion for Star Wars, like any other fanatic, is channeled throughout his home, with memorabilia. It's also channeled as wrapping on his vehicle.

A terminally ill Star Wars fan at Rowans Hospice in England feared he wouldn't make it to see "Star Wars: The Rise of Skywalker." Then Disney stepped in after CEO Bob Iger caught wind of the patient's request.