Houston rapper Travis Scott giving away $100,000 to fans on Twitter 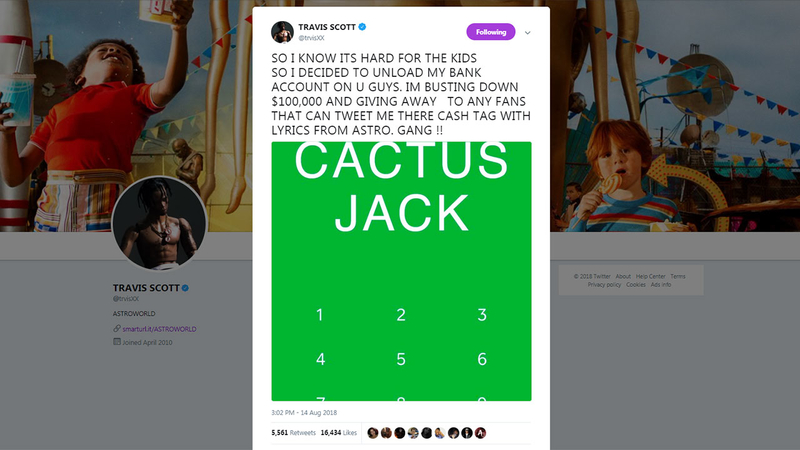 HOUSTON, Texas (KTRK) -- If you're following Travis Scott on Twitter, then today may be your lucky day.

The Houston rapper just tweeted that he's giving away $100,000 to a few lucky fans.

The act of kindness comes nearly a week after Scott dropped his highly anticipated album "Astroworld."

The Missouri City native tweeted, in part, "So I know it's hard for the kids, so I decided to unload my bank account on you guys."

SO I KNOW ITS HARD FOR THE KIDS
SO I DECIDED TO UNLOAD MY BANK ACCOUNT ON U GUYS. IM BUSTING DOWN $100,000 AND GIVING AWAY TO ANY FANS THAT CAN TWEET ME THERE CASH TAG WITH LYRICS FROM ASTRO. GANG !! pic.twitter.com/7o3KlxnTm2

Scott says he will send the money through Cash App to fans that can tweet their "Cash tag" with lyrics from his new album.

Scott has already given three fans $50.

Check ur account just dropped a lite 50 for ya https://t.co/n1ok11UMQz