Jesús Alfredo Guzmán Salazar, known as Alfredillo, is believed to be at the top of the heap.
KTRK
By Chuck Goudie 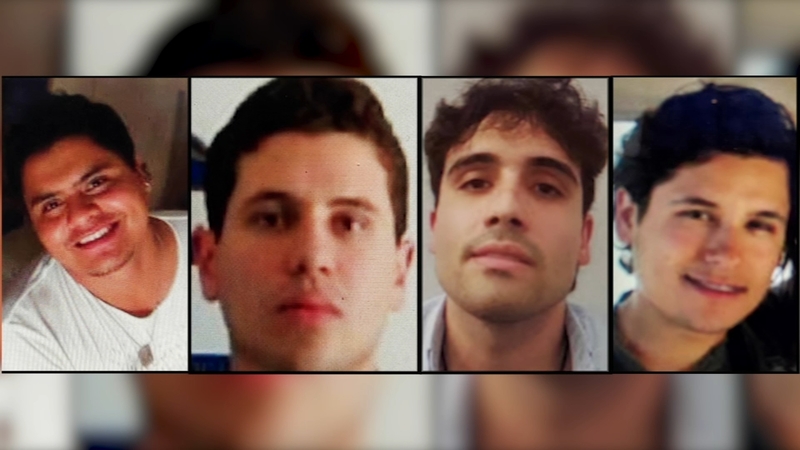 New details of government plan to track down, arrest 4 of El Chapo's sons

CHICAGO -- While Mexican drug kingpin Joaquin "El Chapo" Guzman is in a U.S. prison, four of his children are either under indictment or under investigation by federal agents in Chicago.

They are known as Los Chapitos, the four most-trusted sons of the world's most notorious drug kingpin. Federal drug investigators in Chicago consider El Chapo's sons in charge of the Sinaloa cartel, the multibillion-dollar criminal empire once run by their father, the investigative team at our sister station WLS reported.

That cartel remains the Chicago area's largest trafficker of heroin, cocaine and methamphetamine. U.S. officials have now put bounties on each of the sons at $5 million per man.

From the moment Guzman was arrested in 2016 after a firefight with Mexican commandos, his sons were destined to assume the throne of the Sinaloa cartel.

Even though their father is believed to have dozens of children, four were groomed early to take over in his expected absence, WLS reported. Now, with El Chapo doing life at the super-max prison in Colorado, they are in charge. Sons Joaquín Guzmán López, Ovidio Guzmán López, Iván Archivaldo Guzmán Salazar and Jesús Alfredo Guzmán Salazar are in demand by American authorities.

Jesús Alfredo Guzmán Salazar, known as Alfredillo, is believed to be at the top of the heap. He's now under indictment in Chicago, charged with trafficking and conspiracy.

El Chapo's apparent number-one son doesn't hide his narco-world affluence. WLS has reported that he posts videos of his expensive fleet of sports cars, private planes and the trail of cash that has made him a top target of federal agents.

The State Department has now put up $5 million reward offers on each of the Chapitos. U.S. officials have added a detail to the fugitive file of Ovidio Guzmán-López. They now say the drug lord nicknamed "The Mouse" has ordered the murders of informants, a rival drug trafficker and a popular Mexican singer who refused to perform at his wedding.