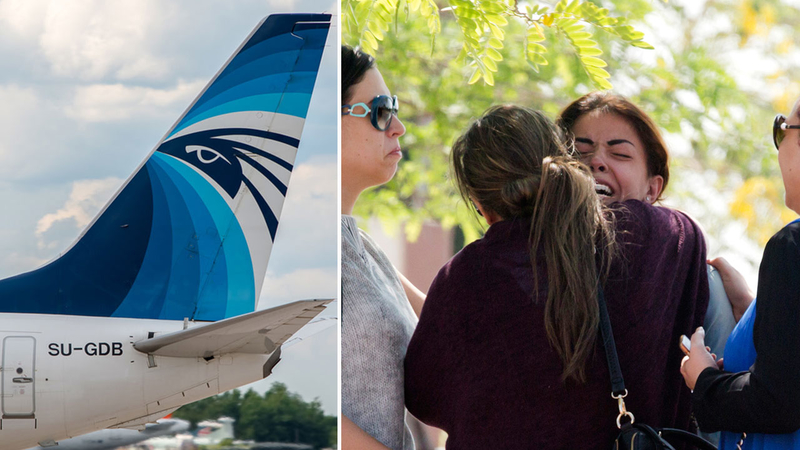 ALEXANDRIA, EGYPT -- Human remains, an airplane seat and luggage were found about 5 miles south of where an EgyptAir flight lost contact with radar and went missing over the Mediterranean Sea, a Greek official said.

The plane was en route to Cairo from Paris when it disappeared early Thursday with 66 aboard. The plane lost contact with the radar tracking system at 2:45 a.m. at an altitude of 37,000 feet, according to EgyptAir.

Search teams today are scouring a wide area south of the Greek island of Crete for signs of the Airbus A320, Greece's Ministry of National Defense said this morning, while Egyptian President Abdel Fattah el-Sisi later said that investigations are continuing "to establish the truth and the causes of the crash."

Egyptian officials said earlier the incident was more likely caused by terrorism than a technical problem.

"I don't want to go to assumptions like others, but if you analyze the situation properly, the possibility...of having a terror attack is higher than having a technical [failure,]" Egyptian aviation minister Sherif Fathi told reporters Thursday.

U.S. officials said its government satellites have shown no indications of an explosion along the flight path.

Greek Defense Minister Panos Kammenos said the plane swerved wildly before plummeting into the sea, according to The Associated Press.

But the Egyptian military says no distress call was received from the pilot.

Grieving relatives had no choice but to endure the inaccuracies made by authorities as dozens gathered at Cairo International Airport Thursday, awaiting any word on whether the plane would be found.

Even French President Franois Hollande was left to speculate on whether terrorism was the main culprit in the downed aircraft.

"When we have the truth, we need to draw all the conclusions," Hollande said during a news conference in Paris. "At this stage, we must give priority to solidarity with the families [of the victims.]"

Among the 66 people on board, there was one child, two infants, three EgyptAir security personnel and seven crew members, said the airline.