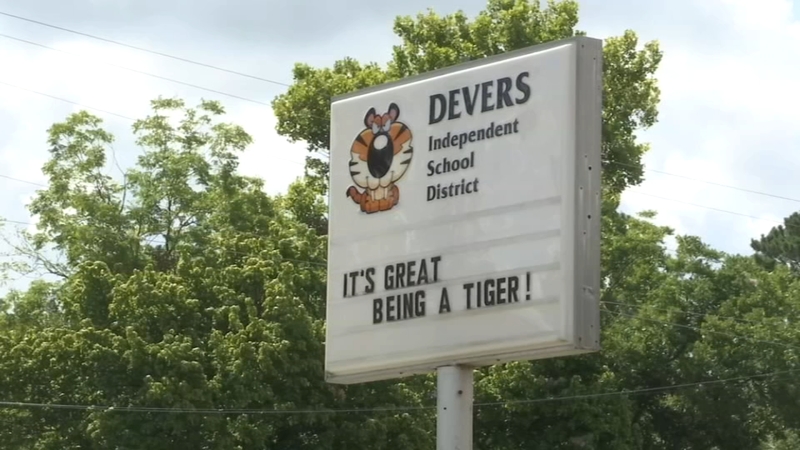 The small, rural district in Liberty County is now the first in our area to go to a four-day school week.

Classes will be held Monday through Thursday, meaning teachers and students will have Fridays off.

The school year runs a few days longer, and the district added 35 minutes to every day.

This year, there won’t be classes on Friday!

How it works and why they decided to make the switch, coming up on @abc13houston! pic.twitter.com/2it7EHzwR0

"Luckily, we are in a district that does very well. Currently, we are #7 in the state, and we're very proud of that," said Devers ISD Superintendent and Principal Elizabeth Harris. "It all goes back to the teachers and the job that they do."

Harris says the district decided to make the switch (1) to improve attendance and (2) to attract more transfer students.

Attendance, at 96.5%, was generally outstanding, but Harris told ABC13 Friday attendance was "awful."

Average daily attendance has a huge impact on state funding.

"During hunting season, those kids are hunting with their dad, and now they're not going to miss Friday and they're still going to be hunting with dad," said Harris. "We've got a lot of happy dads right now."

The district surveyed parents, and more than 92 percent said they supported a Monday through Thursday school week.

"I want to take them out of the classroom, go teach them something that's not in school," said Stoesser. "We get to hit museums while they're not so crowded, zoos, even the things around here they don't get to see all the time. And more importantly, we get to spend more time with our kids so that makes us happy."

But what about working parents?

"I'm sure there are those concerns because I have them," said Devers ISD parent Mandi Simeon. "On Fridays, I'm going to have to find somewhere for the boys to go."

"The academics are just really worth it," said Simeon. "And a four-day week, you can't beat that!"

Parents also tell us they aren't worried about their kids falling behind.

There are only about 200 students enrolled in Pre-K through 8th grade in the entire district, so the children already get a lot of attention from their teachers.

Devers ISD is among the highest performing districts in the state.

"Do I think our state assessments will drop? Absolutely not," said Harris. "Our teachers are not going to allow that to happen."

Harris says even larger districts are trying to make the schedule change work.

More than an hour away from Dallas, Athens ISD just switched to no classes on Friday too.

"We are at a bit of a competitive disadvantage when it comes to salaries," said Athens ISD spokeswoman Toni Clay.

That district is hoping the unique schedule will attract teachers.

"I think Athens is going to be the one to look at," said Harris. "I'm not going to say it's a fit for everyone but I'm saying that it's worth looking into."