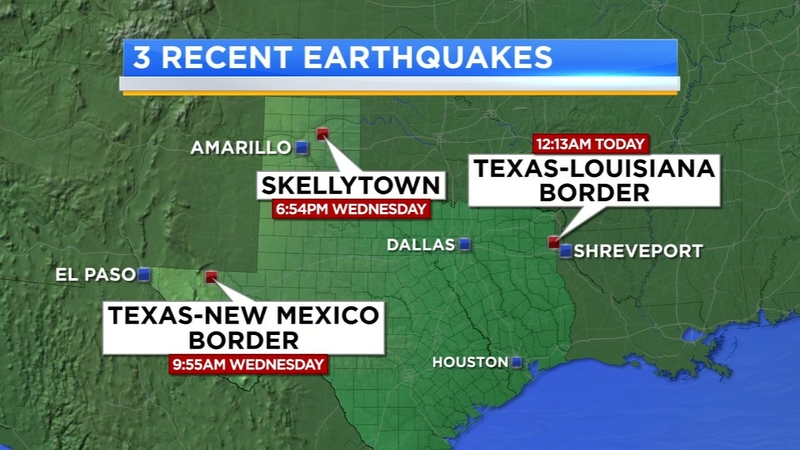 Multiple earthquakes reported across Texas Wednesday, including a magnitude 4.3 quake in the northern part of the state.

The first quake was reported along the Louisiana border in northeast Texas around 12:13 a.m. Thursday. The U.S. Geological Survey said a 2.5 magnitude earthquake struck the area of Uncertain, a community of around 60 near Caddo Lake.

Quakes that are 2.5 or less on a seismograph are not usually felt and are the most common, numbering around 900,000 each year, according to the USGS.

The strongest quake in the state this week, a 4.3 shaker, struck the panhandle area northeast of Amarillo just before 7 p.m. Wednesday. It was felt as far away as 50 miles, according to geological reports.

Earlier in the day, a minor quake shook the Texas-New Mexico border near Whites City, a small community north of the state line. The 2.7 magnitude event wasn't strong enough to be felt and struck a sparsely populated area.

There were no reports of damage in either of the impacted areas.

On Saturday, a 3.3 magnitude quake happened in Smiley, a community of around 700 in Gonzales County. No damage was reported.
Smiley is approximately 160 miles west of Houston.