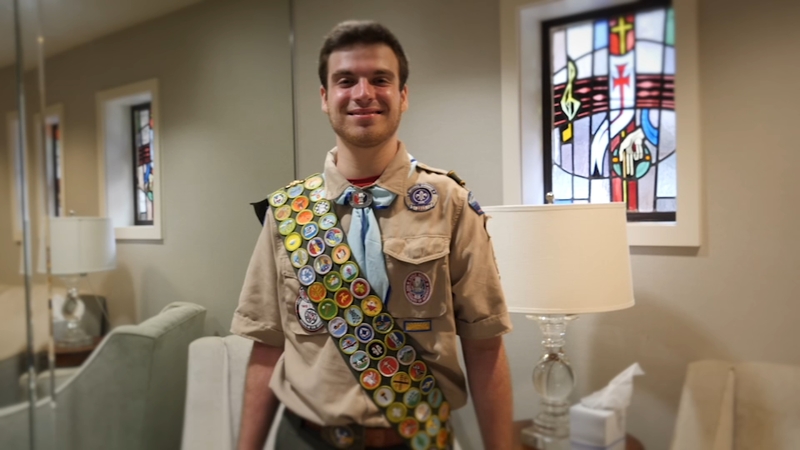 HOUSTON, Texas (KTRK) -- A Houston teen has accomplished something that few have done: earning every single merit badge offered by the Boy Scouts of America.

"I earned Eagle Scout relatively early," said 18-year-old Harry Goldberg, of Troop 55. "To get Eagle Scout, you need 21 merit badges. So after I earned it, I still wanted to keep going."

"Only 2 percent of all Boy scouts earn Eagle Scout," said Harry's scoutmaster, Robert Lombardi. "So if you factor in how many actually have earned all the merit badges, that's a pretty minute number."

Goldberg worked for six years to earn 138 merit badges. The Boy Scouts of America only offers 137 badges, but the teen earned a computer merit badge before it was discontinued. He says some badges only took hours to complete, while others took months.

"Bugling, that was one of the hardest merit badges for me to earn because I had never touched a bugle before," said Goldberg. "Another hard merit badge was shotgun shooting because you have to hit a certain number. I kept not being able to qualify, so I probably went back to shoot seven or eight different times at different camps."

Goldberg also credits his parents for supporting him and driving him on trips to earn merit badges.

"For his snow sports merit badge, we had to go where it snowed," said Harry's father, Jay Goldberg. "That was about a 20-hour drive in each direction."

Harry also says earning merit badges has taught him what he may be interested in as a possible career.

Harry, who is home-schooled, still has one more year of high school to go. He hopes to attend a university like Georgia Tech, the University of Houston, Rice University or MIT.

His troop says he will be successful in whatever he chooses to do.

Over the weekend, one Houston-based troop recognized 12 members who earned the title of Eagle Scout.